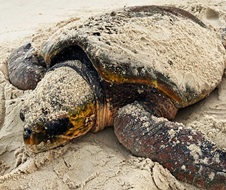 Holly West from NSW TurtleWatch said the nesting season typically starts early November and is asking beachgoers to keep an eye out for turtles on beaches along NSW's north coast.

"We're hoping to enlist regular beachgoers as citizen scientists and are calling on them to please report any turtle sightings to NSW TurtleWatch," said Ms West.

"It's vital that people don't disturb these nesting turtles or their buried nests, but if they see these animals, please take note of where and when and report the sighting immediately.

"Female turtles typically come out of the water between dusk and dawn to lay their eggs so beachgoers should also keep an eye out for tracks in the sand if they are on the beach early in the morning.

"Last year we saw 7 sea turtle nests between the Tweed Coast and Port Macquarie with one female coming up to lay on Manly Beach in Sydney.

"The 2 most common species that have been reported to nest in NSW are the vulnerable green turtle (Chelonia mydas) and endangered loggerhead turtle (Caretta caretta).

"Once we identify the location of turtle nests, NPWS and NSW TurtleWatch volunteers will work together to monitor and protect the nest from potential predators, coastal erosion and marine debris.

"NPWS and volunteers will also continue to monitor the nest until hatchlings emerge.

"We all want to give these hatchlings the best chance to make it to the ocean, and seeing these little ones make their way to the water is the best part of my job," said Ms West.

The NSW TurtleWatch program has been developed by Australian Seabird Rescue. It is supported by the NSW Government's Saving our Species program in partnership with NPWS and the Marine Estate Management Strategy.

To find out more or to report your sea turtle sightings, please visit NSW TurtleWatch or contact them on 0468 489 259 or turtlewatchnsw@gmail.com. Turtle sightings can also be reported to your local NPSW office or by calling 13000 PARKS.