How a citizen scientist found a new population of rare orchids

For as long as she can remember, Tammy Lee has loved the bush. 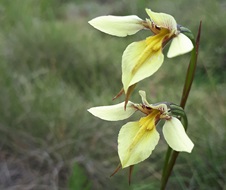 From an early childhood spent studying the plants and animals in her local area, to more recent expeditions into Kosciuszko and its surrounds to document everything she finds, Tammy feels at home when she’s observing Australia’s ecosystems.

“This has never left me, even though my working life has led me elsewhere,” reflects Tammy.

“In my spare time I am out walking, exploring and trying to learn more about everything I come across.”

This thirst for knowledge led Tammy to start up the littlepurplepea blog. Part personal ID record and part creative project, this blog links Tammy’s plant and animal photos to memories, events, habitats, seasons and, most importantly, places. As the about me section reads; “this blog serves as a kind of encyclopaedia for me. If you get something out of it, then great!”

During a trip to Kosciuszko National Park, Tammy and a friend were doing their favourite thing in the world – bushwalking, camping out for a few days, exploring the area and recording everything they found. Armed with a phone in her pocket, eager to take images of every little plant or insect she came across, Tammy snapped a picture of a small but intricate yellow orchid with reddish purple streaks. On her return home she identified it as Diuris ochroma, more commonly known as the pale golden moth, and uploaded the image to her blog with little thought to its significance.

It wasn’t long before she was contacted by Saving our Species (SoS) threatened species officer Rob Armstrong, who notified her she’d just discovered the third known population of an extremely endangered plant.

Rob was googling for pictures of threatened plant species when he came across Tammy’s image of Diuris ochroma, the pale golden moth. The striking canary-yellow orchid was known from only two disjunct populations in south eastern NSW.

Rob followed the image to Tammy’s blog, where she had fortuitously recorded the location the photograph was taken. This immediately caught Rob’s eye – the location was entirely outside the known distribution for this plant! He was quick to get in contact with Tammy to clarify the details of this record.

Rob and his team went to the location the following summer, confirming the presence of the orchids and recording their locations across the site. Tammy’s citizen science work wasn’t done yet either, as she did the same at a slightly different location on a separate trip.

You can’t conserve something if you don’t know it’s there, and now that these populations are known to the Saving our Species program, important work can be done to monitor and protect the plants. The area Tammy found the orchid in is now a site of significance, and other important plants were found in the location too, making the entire discovery a massive success.

“I was so excited to be able to provide my data to Rob and contribute further to the study of this plant and its preservation,” Says Tammy.

“If I have helped the cause of conservation in some way with this find, then I feel like I’m doing my bit in this world.

“To me there is nothing more important than conservation, and I believe that we must somehow expand and grow our wilderness areas as well, not just preserve what is left.”