Our animals can face a variety of threats in the wild, like feral pests, disease and habitat loss. This can impact whether they are able to live - and reproduce - safely in their natural habitat. 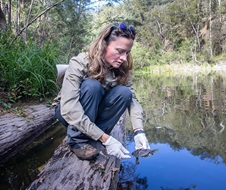 To help our animals, sometimes conservation experts need to temporarily remove them from the wild so they can be kept safe while we try and control these threats and to minimise risk of extinctions.

Saving our Species carries out practical, on-ground actions to secure our threatened plants and animals in the wild. Captive breeding programs, a type of ex-situ management (literally meaning off-site conservation), are one of the many important strategies in our conservation toolboxes that can help the recovery of threatened species.

Breeding helps to increase the size of a threatened species population - and captive breeding provides our animals with a safe space to breed and allows young animals to become strong and resilient, before we release them into the wild. Captive breeding can also help our experts create genetically diverse populations of threatened animals and allow us to learn more about their traits or life-cycle - giving them the greatest chance at future breeding success and survival.

Once the animals are ready and conditions are right, we can strategically release suitable animals into appropriate habitat, and we often track and monitor the species post release to ensure they are safe and to help inform future releases. These actions help to boost the species’ population and gets us a step closer to securing a future for the animals in the wild.

There are many examples around Australia and globally where ex-situ management, as part of a broader conservation strategy, has prevented the likely extinction of a species and resulted in the successful reintroduction of wild populations, including the Bellinger River snapping turtle and regent honeyeater.

Saving our Species works with many partners to run its captive breeding programs, including Taronga Conservation Society and Taronga Western Plains, Zoos Victoria and Aussie Ark – to name a few. 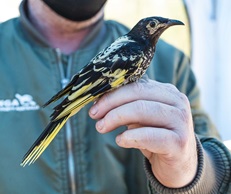 Wild numbers of regent honeyeaters have fallen to critically low levels, largely due to land clearing and competition for nectar from larger honeyeaters. Saving our Species is working with Taronga Conservation Society and BirdLife Australia on a captive breeding program to help release genetically-diverse regent honeyeaters back into suitable habitats.

As part of this program, 58 regent honeyeaters, bred at Taronga Zoo and Taronga Western Plains Zoo, were recently released on Wonnarua Country within the Kurri Kurri and Cessnock Woodlands, to boost the critically endangered bird’s population in the wild. Excitingly, monitoring with Birdlife Australia has discovered that within weeks of birds being released that some of these zoo-bred regent honeyeaters are breeding in the wild! While there’s a long way to go before any chicks are raised and fully-fledged, this development – a NSW-first – has given our teams cause for celebration. 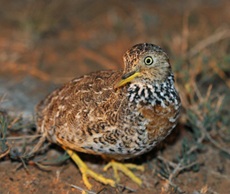 Wild populations of plains-wanderers have declined dramatically over the past 20 years, with estimates suggesting there are fewer than 1000 individuals across the two remaining wild habitats in the Northern Plains of Victoria and the Riverina in New South Wales. 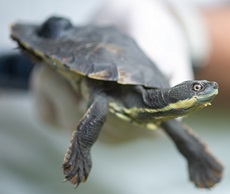 In 2015, a novel virus almost wiped out 90% of the turtle’s population. At the time, our experts safely removed some remaining healthy turtles from an upper stretch of the river the virus hadn't yet reached and with Taronga Zoo, established a safe space for the turtles to breed whilst we work on how to manage the species in its wild habitat. 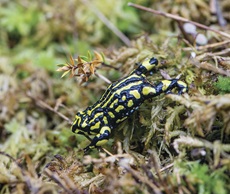 The southern corroboree frog is one of our state’s most threatened species, with less than 50 mature individuals remaining in the wild at Kosciuszko National Park.

The southern corroboree frog has been heavily affected by the amphibian chytrid fungus, which is responsible for major frog extinctions worldwide.

In partnership with NSW National Parks and Taronga Conservation Society, Saving our Species has released hundreds of captive-bred frogs into specially constructed disease-free frog enclosures within Kosciuszko National Park, as part of efforts to return healthy populations of this species back into the wild.

This captive breeding program has brought the species back from the brink of extinction.

Saving our Species can’t imagine a world without our birds, turtles and frogs, and we’re committed to securing a future for our threatened species in the wild. Find out how you can join the movement to help.

Bringing sea horses and kelp forests back to world's most ic...