To celebrate National Science Week, we’re showing you how experts from the Saving our Species program are using science and technology to conserve the Bellinger River snapping turtle.

Saving our Species (SoS) is full of interesting and passionate scientists who use science and technology in their everyday work to support the conservation of threatened species.

Here we profile some of the scientists involved in the recovery of the critically endangered Bellinger River snapping turtle (Myuchelys georgesi) and the way they’re using science and technology in their work.

This rare turtle’s survival was put under threat, after a freak virus in 2015 wiped out 90% of its population. The Bellinger River snapping turtle is endemic to the Bellinger Catchment on the north coast of NSW. 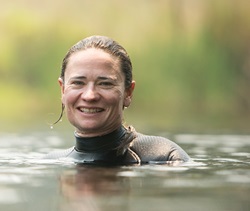 Gerry McGilvray is a Project Officer with SoS. Gerry has a Bachelor of Science (Environmental Systems) and further qualifications in Project Management.

Gerry, along with Shane Ruming, leads the SoS Bellinger River snapping turtle conservation project. Gerry coordinates biannual snorkelling and trapping surveys of the turtle to estimate population size and threats and oversees the trial release and monitoring of captive bred turtles to supplement the wild population. Some of her other responsibilities include managing an expert reference group to coordinate work on turtle genetics and ecology, habitat restoration and water quality monitoring.

Gerry finds snorkelling in the Bellinger River to capture turtles the most rewarding part of her job. 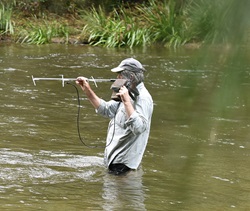 Shane has been a Threatened Species Officer with the Department of Planning, Industry and Environment for over 20 years. He’s been involved with the Bellinger River snapping turtle conservation project since the mass mortality disease event in early 2015 and identifies it as the most challenging yet rewarding project he has worked on.

In particular, the release and radio tracking of captive bred animals has given Shane an appreciation for how well the captive animals appear to be adapting to life in the wild so far. 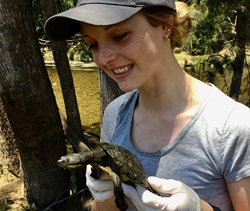 Kristen Petrov is a PhD student at Western Sydney Universityand is studying the threats to the recovery of the Bellinger River snapping turtle. Kristen’s research focuses on the interactions between the remaining wild Bellinger River snapping turtle population and the Murray River turtle (Emydura macquarii), which, although a native species, has been relatively recently introduced to the Bellinger.

As part of her PhD, Kristen is assessing the potential for food competition between the Bellinger River snapping turtle and the Murray River turtle, using stable isotope analysis. Stable isotope analyses provide a chemical signature that can be used to identify the position of an animal in the food web, and broadly determine what foods an animal is eating.

This approach will allow Kristen to determine whether the two turtle species are eating the same plants and animals, which is a start to determining whether the Murray River turtle is outcompeting the Bellinger River snapping turtle and slowing their potential recovery from the virus. 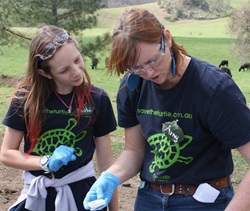 Amy Denshire coordinates ‘Bellingen Riverwatch’; a program where citizen scientists collect data on the health of the river to inform management of the Bellinger River snapping turtle. Over the past 3 years, Bellingen Riverwatch has engaged 11 partners, 49 citizen scientists and 7 schools to collect water quality data at 28 sites across the Bellinger, Never Never, and Kalang Rivers.

Amy loves bringing people together to enjoy citizen science. Bellingen Riverwatch is all about getting outdoors, learning new skills, meeting new people, and working together to contribute to a long-term data set that will help scientists build an understanding of the rivers' health now, and the changes that are happening to those ecosystems over time.

Bellingen Riverwatch is always looking for more volunteers to support this important program. Testing is held on the second Tuesday or Wednesday of the month. Volunteers available on those days with access to a car can register for training days (2 and 23 September) by visiting ozgreen.org/br. Places are very limited.

Other partners contributing science and technology skills to the Bellinger River snapping turtle project include:

Tracking turtles on the Tweed Coast