With the smoke having cleared from the 2020 bushfire season, we can now watch our bushland and affected communities embark on the slow process of recovery.

While the news headlines have mostly moved on, we think this is a great time to share some of the lesser-known stories of heroism that occurred during the fire period.
It’s no secret that many endangered species came under threat from fire fronts, but in the confusion and rush to contain these fires, some were at risk of becoming collateral at the hands of well-intentioned firefighting activities.

The Mongarlowe mallee tree is one of the rarest plants in the world, with only 5 known individuals spread across four top-secret locations.

As the Charley’s Forest ‘mega-fire’ crept close to one of the trees in the southern tablelands, it wasn’t the fire that posed a threat but rather the construction of fire breaks using heavy machinery.

Thanks to some good communication between the South East Compliance and Regulation team and the Incident Management Team, and the cooperation of the landholder with the Mongarlowe maller on their property, SoS staff quickly located and tagged the tree and its surrounding habitat.

This mapping information was then sent to RFS fire control headquarters in Queanbeyan so the tree could be avoided when fire containment lines had to be built. To lose one of only 5 plants would have been a devastating blow for this species, and it wasn’t the only one that faced this issue. 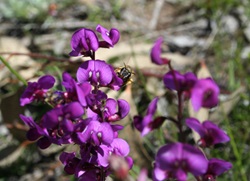 The small purple-pea, listed as endangered under both NSW and Federal legislation, has only two major southern populations – one of which occurs on some historic fire breaks along a railway easement near Queanbeyan. When the Orroral Valley Fire was moving east from the ACT into NSW, the RFS planned to re-grade these fire breaks where the endangered small purple-pea occurs.

Luckily, a NPWS ranger who was working in the Queanbeyan RFS fire control centre contacted SoS Threatened Species Officer John Briggs, letting him know of the RFS’s intention to re-grade the fire breaks. The RFS didn’t want to damage the small purple-pea populations and brought John on board for the operation.

John and the RFS heavy plant machinery supervisor drove ahead of the grader and marked sections where the small purple-pea occurred, so alternative fire breaks could be made. Everyone involved got to learn about this curious little plant in the process too.

Understanding the impacts of climate change on bushfire risk

How will heatwaves change in NSW?