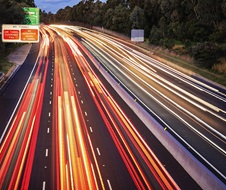 'The governments of New South Wales, Victoria and Queensland are signing Memorandums of Understanding for the refuelling corridors, starting with the Hume Highway, the Pacific Highway and the Newell Highway.'

Victorian Minister for Energy, Environment and Climate Change Lily D'Ambrosio said this agreement will be key to reducing emissions in transport and logistics, one of the country's most important sectors of the economy.

'The renewable hydrogen highway will create new jobs, drive investment across the east coast and is a landmark step towards meeting Victoria's target to halve emissions by 2030 and reach net-zero by 2050,' Ms D'Ambrosio said.

'When you consider the impacts of the COVID pandemic and international conflicts, it's clear Australia must achieve energy independence, to shield our nation from foreign companies and foreign powers,' Mr de Brenni said.

'Low emissions electricity and hydrogen fuelled heavy transport will sit at the heart of the renewable energy eco-system. Transport is the fastest growing sector for emissions and ironically it could also be the key to reducing them.'

Under the Memorandum of Understanding, the States have agreed to collaborate on the development of the east coast hydrogen refuelling network, including on the Hume Highway, the Pacific Highway and the Newell Highway by 2026.

The work will commence with Victoria and New South Wales will each provide $10 million to build at least four renewable hydrogen refuelling stations between Sydney and Melbourne. The funding will also provide grants for the country's first long-haul hydrogen fuel cell electric freight trucks.

Statement about the implementation of the Wild Horse Managem...

NPWS and Snowy Monaro Regional Council on lookout for triffi...