Our national parks are vital ‘green lungs’ for the environment. Not only are they special places for winding down for some and winding up for others – they are also home and refuge to many of our threatened species. 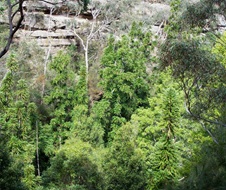 We would like to mark the occasion of NPWS’s 50th by recounting this amazing story.

Reminiscent of a scene from ‘Jurassic Park’, Wollemi National Park provided the setting for avid bushwalker and National Parks (then) Field Officer David Noble’s 1994 discovery of the ancient Wollemi Pine. It was David’s botanical knowledge that led to him following up the unusual plant – something that a less curious adventurer may have easily missed.

The ‘living fossil’ belongs to the Araucarioides coniferous tree family (the same family as the Norfolk Island Pine), dating back 200 million years and had survived fire and other adverse conditions in its remote and protected location. It grows to 40 metres in its natural habitat.

Scientists and conservationists have since worked hard to propagate the tree, also known by the scientific name Wollemi nobilis, after its discoverer.

Following the 1994 discovery, David ‘Dave’ Noble became an NPWS Ranger. He currently looks after Gardens of Stone, Turon, and Marrangaroo National Parks and is based at the Blue Mountains Heritage Centre.

Dave recently told SoS News how it felt to discover the Wollemi Pine – and the work put into its conservation since.

“At the time, it was just another weekend canyon trip into the Wollemi Wilderness,” Dave Noble said.

“We were looking for new canyons, abseiling down waterfalls to places where no one had been before. The best canyons are narrow, deep, dark, and long.

“We had completed the descent and sat down for lunch when I noticed a tree that I hadn’t seen before. Without thinking too much I collected a small leaf sample and put it in my backpack to identify at home.

“Even though it had quite distinctive features it proved to be too hard for me to identify. So, I took it into work later in the week and gave it to Wyn Jones, the Senior Naturalist at NPWS in Blue Mountains.

“Wyn asked how big the bush was. When I described it as a 40 metre high tree he said we must visit the site.

“Making the most of the return visit we descended a different canyon before arriving at the tree.

“It was then I suspected it might be something new as the excitement in Wyn’s eyes was clear to see!”.

The conservation of the species since has seen thousands of trees propagated and distributed around the world. In the wild, the population remains untouched with strict access requirements.

The Royal Botanic Gardens Sydney has been exclusively licensed through NPWS to propagate and market the Wollemi Pine in Australia and internationally. The aim of releasing the tree was to safeguard its long-term survival by removing the threat of visits to the wild population.

Grow your own Wollemi Pine

Wollemi Pine seedlings can be ordered online or bought at some plant nurseries. Google ‘Wollemi Pine’ for options.

Dave Noble said that when cared for properly (sheltered from harsh conditions such as frost) and watered regularly, the pine will grow well in a number of locations.

Happy 50th Birthday NPWS – and happy longevity to our threatened species including the iconic Wollemi Pine!

In October 2017 the NSW National Parks and Wildlife Service celebrates 50 years of proudly protecting and preserving our natural landscapes, wildlife, culture and heritage.

Our national parks and reserves are home and refuge to many of our native plants and animals and play an important part in helping save our threatened species.

This conservation project aims to secure the Wollemi Pine in the wild in NSW for 100 years, engage local communities in its conservation, and encourage the NSW community to identify with it as a flagship for threatened species conservation.

Give seal a wide berth at Forresters Beach