In the spotlight - Paul Segal

Paul Segal has had a love of the bush and wildlife since he was in 4th grade when a school friend showed him a book about bringing birds back to gardens. He and his friend then successfully campaigned to save some wattle trees at their school. 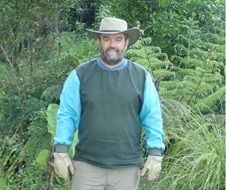 That early passion has culminated in Paul and his wife, Lindsay, placing a conservation agreement over their 20-hectare property, Sassafras, on the NSW mid-north coast.

Paul has a special interest in threatened species on their property 'especially the plants because they don’t run away from me'. As well as providing habitat for 21 threatened fauna species and the vulnerable trailing woodruff (Asperula asthenes), Sassafras is the only protected area with the endangered plant, Solanum sulphureum.

Understanding how everything has its place in a functioning ecosystem, Paul sees their property 'as a life raft' for species in their area and 'an important stepping stone for those who pass through', because 'this place is a finger of forest sticking into a sea of pasture'. Both he and Lindsay have invested in making their property a suitable home for wildlife. By getting rid of weeds, for example, Paul knows he is making a positive difference to the environment that will last well into the future.

Paul encourages others to protect threatened species habitat and suggests you first look at all the threatened species in your area online via BioNet. He recommends people try not to destroy habitat: 'If you can, create more habitat, sometimes you can do that just by leaving things alone!'

Paul and Lindsay have areas where they leave the grass grow a little longer when the fire danger is lower because it creates better habitat for lizards and insects and seed. This benefits many species that frequent their garden, including the threatened red-legged pademelon (Thylogale stigmatica) which comes to eat just a little grass, and the common planigale (Planigale maculata) which lives in a pile of blackwood logs on the edge of the grass.

Placing a conservation agreement over your property, like Paul and Lindsay, is a great way to protect threatened species for future generations.

By Tania Duratovic, Office of Environment and Heritage

To learn more about the Saving our Species program or to get involved, visit our website.