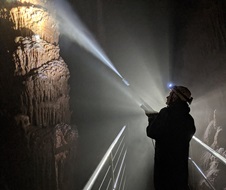 "Among the tales of tragedy and destruction caused by the fires across Australia, it is a relief to find that most of the renowned caves precinct has been saved," Mr Kean said.

"The dedication of all the fire crews prevented damage to the Caves House and other significant heritage buildings."

Caves' staff have worked hard to re-open the caves just a month after the fires.

"From Saturday, Jenolan Caves Road between Caves House and Bastard Point Road will re-open to light vehicles, which means visitors will be able to use this section of road, as well as Edith Road, to access the Jenolan Caves," Mr Toole said.

"Jenolan Caves Road between Duckmaloi Road and Caves House will remain closed to traffic while repair work and clean up continues."

Jenolan Caves Trust Director Jodie Anderson said the hotel and hospitality services at the heritage-listed Caves House, Caves Café, Chisolm's Restaurant and seven of the spectacular caves will re-open on 1 February. Initially, only online bookings will be accepted.

Although Jenolan's bushwalks are not yet safe to re-open, visitors will be able to stroll along one side of the beautiful Blue Lake.