Senior scientists from the Department of Planning, Industry and Environment, Nicholas Carlile and Dr Terry O'Dwyer, have been officially honoured for their scientific leadership in helping safeguard the future of one of the nation's most precious natural assets World-Heritage-listed Lord Howe Island. 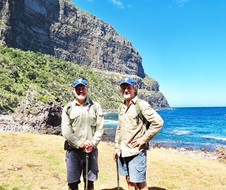 Until mice arrived in the late 19th century and rats, following a supply ship's grounding in 1918, Lord Howe Island was flourishing with an array of diverse birds and invertebrates. The only mammals on the island were microbats. Insects like the Lord Howe Island phasmid and wood-feeding cockroach filled the roles of herbivorous mammals, and currawongs along with the endemic boobook owl, were the top order predators. But few of these species were equipped to deal with an exploding population of rodents and, in the past century, cascades of extinctions took place, and the entire ecology of the island began to slowly wind down.

The introduced pests exploded in numbers reaching as many as 300,000, invading every ecological niche from the beaches to the precious cloud forests on the summits of Mount Gower and Lidgbird. Rats devoured crabs, insects, seeds, seedlings, eggs and chicks of both sea and land birds that led to five endemic bird extinctions. O'Dwyer said that before the eradication, rodents posed an existential threat not just to individual species but to the entire ecosystem.

The Lord Howe Island Rodent Eradication Program (LHI REP) took around 15 years of detailed research and planning. It was part of a holistic ecological restoration program Protecting Paradise led by the Lord Howe Island Board, which included removing destructive invasive species such as rodents and noxious weeds.

The Lord Howe Island Board engaged Carlile, who had researched island ecology in New South Wales for decades and was recognised as an expert on Lord Howe Island's seabird assemblages. The team had also carried out eradications on other NSW islands since the 1990s, explains Carlile. "We knew for Lord Howe we had to get a thorough understanding of what native species would interact with the baits spread over the entire island."

Using non-toxic baits, a team of scientists tested all vertebrate animals on the island to ascertain which would consume bait. Additional long-term studies were done on the island top bird predator that uncovered their taste for mice and rats. Through these studies, 2 endemic species, the Lord Howe woodhen and Lord Howe currawong, were identified as being at risk of ingesting baits or eating dying rodents. This established the need for a captive management plan to protect the species during the baiting program.

Before the commencement of the eradication program, Carlile worked with a team of researchers to determine the impacts of rodents on the islands' seabirds, land birds, and invertebrates. Black-winged petrels were identified as being heavily impacted by rodents, explains O'Dwyer.

"Their breeding success should be about 50 to 70%. When rats were present it was between zero to 11%. Near the island's airport, one colony produced just one chick out of 40 nests in 2017. The rats either took the eggs or harvested the chicks before they could fly away."

The pair conducted efficacy studies of the proposed bait, demonstrating that it was sufficient to kill all island rodents, despite concerns of bait resistance. Carlile and O'Dwyer also conducted residual poison testing to understand whether the bait had entered waterways, soils or plants during the baiting phase.

In the winter of 2019, Carlile and O'Dwyer, with a team from Lord Howe Island Board, captured half of the island's currawongs and 85% of the iconic woodhens. These were both brought into captivity, where they were cared for by staff from Taronga Zoo. While these species were safely in captivity, baits were laid using helicopters in the island's remote areas and enclosed bait stations in and around the inhabited community areas. Carlile and O'Dwyer walked for over 560 hours around the island during the active baiting period, searching the island and monitoring for any injured birds that may have ingested baits.

Perhaps the most astonishing flourishing has been the bounce back of one of the World Heritage area's most iconic species – the Lord Howe Woodhen. In the 1980s there were as few as 20 left in the wild. Determined management and captive breeding got those numbers up to just over 200 before the rodent eradication. But in just 18 months since the eradication program ended, woodhen numbers have surged dramatically to over 600, and the threatened birds are once again a common feature across the island. The Lord Howe Island Board are currently part way through the 2021 woodhen survey with O'Dwyer contracted to assist with banding the birds, so far, the results are looking very promising.

"Their breeding success has increased to over 50% a few years in a row so they are well within the range for burrow nesting petrels now."