Monitoring and trapping reveals the entire colony of brush-tailed rock-wallabies in Kangaroo Valley have survived the 2019/2020 bushfires. 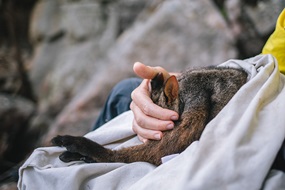 Despite this fire damage, radio tracking collars on two translocated wallabies, Cliff and Tara, confirmed their wellbeing, giving hope to Saving our Species (SoS) and NSW National Parks (NPWS) staff that other members of the colony may have survived the blaze.

The dedicated team had been trekking into the fire ground every week since the fire to deliver carrots, sweet potato and lucerne to aid the wallabies in their post-fire recovery. Remote monitoring cameras were installed at core colony areas and at these food and water stations, allowing SoS staff to spy on the survivors.

SoS staff recently conducted trapping within the fire ground to get hands-on assessments of the health of the wallabies and to remove the tracking collars on the two translocated individuals.

The team were ecstatic after successfully trapping and releasing several healthy wallabies, including one young at foot individual that they had not seen before. Since this trapping operation, they have been able to confirm more good news – the entire colony survived!

For now, they will continue to support the wallabies by keeping watch on individual’s health through strategically placed monitoring, which also informs them on movements of introduced predators that now pose an even greater threat since the landscape was opened up by fire.

The local community has been and continues to be integral to the continued survival of these special animals. Even now, when countless people have been impacted by the recent fires themselves, landholders continue to help National Parks in conjunction with community groups like the Friends of the Brush-tailed Rock-wallaby to support and protect the wallaby populations.