Keen whale-watchers are invited to head to one of five National Parks and Wildlife Service (NPWS)-hosted locations on Sunday 25 June to participate in Australia's annual whale census. 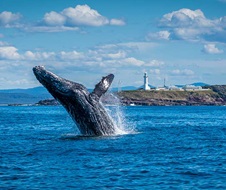 The NPWS-hosted locations for the national humpback whale migration census day held each year by marine mammal rescue organisation ORRCA (Organisation for the Rescue and Research of Cetaceans in Australia) are:

The annual whale count is an opportunity for the public to help gather information to build a snapshot of whale movements and behaviours.

The humpback whale migration is a conservation success story, with 30,000 humpback whales expected to pass by the NSW coast this whale watching season-up from just 200 to 500 estimated to have been left in the 1960s after decades of whaling.

NPWS is encouraging everyone to come along to the whale census day on Sunday 25 June to help tally the number of whales swimming past and to learn more about these giants of the deep.

At each of our five locations we'll have information sessions run by NPWS guides, as well as interactive activities for children.

Bring along your binoculars, and together with the ORRCA volunteers we'll help count the whales and update and display the tallies throughout the day.

ORRCA President Ronny Ling said the data gathered from around Australia on the annual whale census day helps grow understanding about these wonderful animals and how they can best be protected now and in the future.

"The annual ORRCA whale census is a special day of the year where the public can get involved in measuring the success of conservation efforts," said Mr Ling.