The NSW Government has today announced the purchase of 194 hectares of prime koala habitat located adjacent to the Lake Innes Nature Reserve, south-west of Port Macquarie. 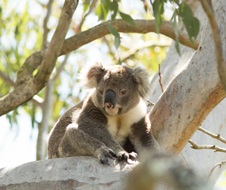 The purchase is funded as a joint initiative and only possible through the generous contribution of $3.5 million from Koala Conservation Australia (KCA) as well as from the NSW Government's landmark $193 million dollar investment in koala conservation.

Environment Minister Matt Kean said the purchase will protect core koala habitat of strategic importance in the Port Macquarie region which will help us reach our target of doubling the koala population by 2050.

"There has been sustained community advocacy to see this land purchased, and I want to pay particular tribute to the local member Leslie Williams and the KCA who have been instrumental in making this happen, their work will leave an enduring legacy for the community for generations to come," Mr Kean said.

"Our iconic koalas are increasingly threatened by the loss and fragmentation of habitat, this purchase will protect critical habitat from development and ensure the koala population in this area is safeguarded forever."

"Our plan is to add this purchase to Lake Innes Nature Reserve and declare it an Asset of Intergenerational Significance, which will provide the highest possible protections to this critically important population in perpetuity."

Member for Port Macquarie Leslie Williams said this is a victory for the many advocates in the local community who have fought so hard for this result.

"The conservation of koalas on this land will be boosted by an ongoing partnership between the NSW National Parks and Wildlife Service and KCA – a great demonstration of what can be achieved when government works closely with the community."

"It's such welcome news here in the Port Macquarie region that the NSW Government has recognised the significance of this land through our passionate local community campaign," Mrs Williams said.

"Our koala population here in Port Macquarie is beloved – a key part of our community's identity, their conservation helps to support the tourism economy attracting tourists who want to enjoy the magic of seeing a koala in the wild." she said.

"Most importantly, our community has the surety of knowing their children for generations to come will see koalas in the wild, which is cause for celebration."

Chairperson of Koala Conservation Australia Sue Ashton said they are delighted that this purchase is finally being made a reality.

"This is a huge win for the koala population in the Port Macquarie region and will play a critical role in helping the population recover after the terrible Black Summer bushfires," Mrs Ashton said.

"KCA is very pleased to partner with the NSW Government to secure this lasting legacy for one of our most iconic species."

As well as the koala, 3 additional threatened species (eastern coastal free-tailed bat, glossy black cockatoo and grey-headed flying-fox) have been recorded on the property.

It is expected more will be found through survey effort, noting another 44 threatened species that may use habitat on the land have been recorded within a 2-kilometre radius of the property.

Port Macquarie is an iconic area for koalas and the local community has strong association with koalas. The Koala (Guula) is a totem animal to the Birpai people and maintaining this population is of great cultural and spiritual importance to contemporary Birpai families.