Coffs Harbour region residents are encouraged to enlist as volunteers in an annual wildlife survey program in Bongil Bongil National Park looking for wildlife, including koalas. 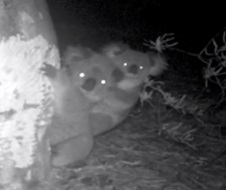 National Parks and Wildlife Service (NPWS) Area Manager Glenn Storrie said the purpose of the annual survey program, running since 2013, is to monitor wildlife presence and health in the national park year to year.

'Community volunteers will be trained and equipped to conduct night-time surveys recording the presence of wildlife they might encounter,' Mr Storrie said.
'This year due to COVID we have delayed the start a month. Appropriate, COVID-safe measures such as effective social distancing will be incorporated into this year’s surveys,' he said.

'This is an exciting wildlife survey program that most participants thoroughly enjoy and look forward to every year. Walking thought the forest at night with a powerful spotlight can reveal a range of native animals not normally seen during the day.

'In previous years the teams have discovered a regionally significant population of the rare yellow-bellied glider while conducting these surveys so koalas are not the only interesting native animals they encounter.

'Teams walk the park’s trails using NPWS survey gear, such as spotlights and audio equipment, and will be supervised and managed by an experienced wildlife ranger, collecting valuable data.

'The surveys are conducted just after sunset in the middle of the koala breeding season in late October to early November, at a time when koalas are on the move, most vocal and most likely to be seen.'

Volunteers are required to conduct the 2-hour surveys beginning just after dark. They are held every 4 nights, a total of 5 nights work over 16 days. Surveys this year begin at 7:00 pm from Monday 25 October 2021 near Repton.

A short information and training session for prospective new volunteers will be conducted at the NPWS offices at the Coffs Harbour Jetty beginning at 6:00 pm on Tuesday 19 October 2021.

People interested in volunteering for the program or who would like to know more about it are urged to contact the project manager, Ranger Martin Smith, at the NPWS Coffs Harbour Jetty office on 6652 0907 or by emailing martin.smith@environment.nsw.gov.au.