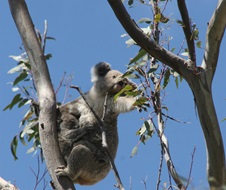 The NSW Government's Koala Strategy – the biggest commitment by any state government to secure koalas in the wild – will provide more natural habitat for koalas, tackle diseases, improve research and fix roadkill hotspots.

"Koalas are a national treasure. This strategy will ensure there are far more of them in the wild," Ms Berejiklian said.

"This unprecedented action is the first part of a long-term investment by the NSW Liberal and Nationals Government that will guarantee koalas have a very bright future in this State."

The centerpiece of the NSW Koala Strategy is setting aside large swathes of land where koalas can thrive and new habitats can be created.

"It is absolutely vital that we protect land where koalas currently live – and secure land where new koala colonies may exist in the future," said Environment Minister Gabrielle Upton.

"Initially, 24,538 hectares of state forest will be set aside for koalas – with more to come.

"This includes 4096 hectares of state forest with koala habitat on the Mid-North Coast that will be transferred to the national parks estate.

"A further 20,442 hectares of state forest with koala habitat will be set aside and managed as koala reserves. This includes state forests on the Far North Coast and in the Upper Hunter, Central Coast, Hawkesbury and Southern Highlands."

The NSW Government will commit $45 million for this strategy. This includes funding for further acquisitions of land that will be set aside for koala habitat.

In Port Stephens there will be a new $3 million koala hospital and tourism centre, providing specialist care for sick and injured koalas. Ultimately, it is envisaged that New South Wales will have a network of koala and wildlife hospitals.

On top of this there will be $4.5 million to boost koala rehabilitation across the State and deliver specialist training for veterinary surgeons and nurses. This will be done with help from experts at Taronga Zoo and tertiary institutions.

The NSW Government will also set up an injured koala hotline and fund new research into diseases affecting the marsupials. This includes trialing a chlamydia vaccine to decrease the incidence of the disease and increase healthy koala populations.

Large numbers of koalas are killed each year while crossing roads. The NSW Government will spend $3.3 million fixing roadkill hotspots, including Picton Road in Wollondilly where new fences will be built to prevent koalas getting on the road.

This will complement two existing wildlife underpasses that enable koalas to cross the road under safely.

The NSW Government will also draw up plans to reduce koala roadkill on Appin Road, Campbelltown.

Other measures in the NSW Koala Strategy include:

The NSW Koala Strategy is the first phase of the NSW Government's response to an independent review into the decline of koala populations in key areas of New South Wales by the State's Chief Scientist & Engineer.