Koalas get 2000 hectares of safety

Nearly 2000 hectares will be added to NSW's conservation estate to fulfil its pledge to protect the longer-term future of the State's iconic koala population. 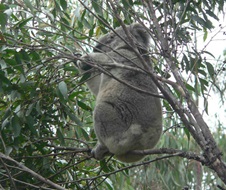 Environment Minister Gabrielle Upton said these additions will not only be a great help for koala conservation on the north coast of New South Wales, but for other threatened species.

"Some 1382 hectares of the Mount Boss State Forest near Wauchope will be transferred to National Parks and Wildlife Service (NPWS) management to become known as the Kindee Creek State Conservation Area," she said.

"Kindee Creek is not only habitat for koalas, but for also for about 30 threatened species including Masked and Sooty owls, the Glossy-black cockatoo, and a number of threatened micro bats.

"What makes this addition especially valuable is that it helps bridge a gap between the relatively well represented coastal conservation reserves and mountain habitats with the mid-elevation foothills country," Ms Upton said.

The other transfer is some 590 hectares of the Oakes State Forest to be added to Gumbaynggirr National Park, 35 kilometres west of Nambucca Heads.

"This addition is known koala habitat, some of which is high quality. It contains several koala records and there are many more in close proximity. Regionally this location is regarded as significant for koalas.

"As well as koalas the addition protects habitat for some 15 threatened species such as the Powerful owl, Sphagnum frog and the Wompoo dove," Ms Upton said.

The transfers are part of the statewide $45 million koala strategy announced in May, which includes the outright purchase of new lands as well as additions of state forest lands to the conservation estate.

The Koala strategy includes the creation of around 24,000 hectares of new koala parks and reserves, Ms Upton said.

"In all, an additional 43,600 hectares will be managed for conservation outcomes in New South Wales.