This week’s heavy rain has triggered a large landslide that closed access to the popular Golden Stairs and Ruined Castle walking track in the Blue Mountains National Park on Wednesday, 29 July. 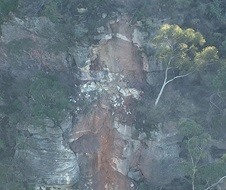 Mr Crust said, “Unfortunately we’re facing a long closure of many months to enable us to clear the landslide and make the track safe again.

“There’s still a risk of further landslides along the track which will have to be assessed before we can begin work.

“The first thing will be for the NPWS to engage geotechnical engineers to assess the damage and advise us how to deal with the remaining hazards and start re-building the track.”

“The landslide at the Golden Stairs also closes Federal Pass Walking Track from Scenic World and inhibits access from Ruined Castle and Mount Solitary extending the closures which are still in place after the recent bush fires.

It is vital people adhere to these closures as the tracks are completely blocked and there is significant risk of further landslides and rockfall.”