The 153,415 hectare Narriearra Station in far north west NSW is the largest purchase of private land for national parks in the State’s history. 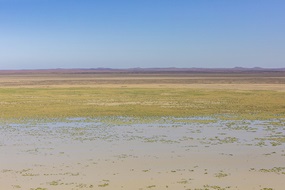 “Narriearra is an important refuge for threatened wildlife, with more than 25 threatened animal species, including nearly 90 per cent of NSW’s critical habitat and breeding areas for the nationally endangered Grey Grasswren.”

Mr Kean said the acquisition secures a key section of a nationally important wetland – the Caryapundy Swamp – which can host tens of thousands of waterbirds including pelicans, straw-necked ibis, egrets and whiskered terns during inland flood events.

“Narriearra along with the nearby Sturt National Park, will create a vast near-contiguous conservation area of almost half a million hectares, or twice the size of the ACT.

“The property is also linked to the ill-fated Burke and Wills expedition, with two expedition campsites on the property.

“In August last year I stated my goal to add 200,000 hectares of land to the national parks estate. I am ecstatic that, on top of 64,860 hectares already reserved, this purchase puts us on track to exceed that.”

The Minister has invited the Tibooburra Local Aboriginal Land Council to suggest a name for the new national park.

Narriearra is in the far north west corner of NSW, just east of Tibooburra, within the Channel Country Bioregion. The property’s northern boundary follows the NSW/Qld state border along the dog proof fence. It is to the east of Sturt National Park.

The iconic Bulloo River is a feature of this desert property, flowing south from Queensland and terminating on Narriearra in an expansive area of floodplain and vast ephemeral wetlands known as the Bullo Lake, Caryapundy Swamp and the Bullo Overflow.

In addition to the ephemeral wetlands resulting from the flood-out terminus of the Bullo River, the property contains a diversity of broad ecosystems including: aeolian dunes supporting both acacia and saltbush shrublands, sandplain grasslands, chenopod shrublands, gibber rises and coolabah lined channels. The wetlands feature large semi-permanent lakes dominated by lignum and cane grass communities, intermittently capable of hosting mass communal nesting events for waterbirds and other wetland fauna.

“There are great numbers of water fowl about the swamp. Ducks, water hens, snipe and a small white long-legged bird of the crane tribe.” Extract from Wills Journal, November 1860

Book early for limited tickets to visit the majestic Muogama...