Life Art - On the ground: Conserving our magnificent malleefowl 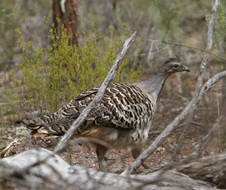 Recognised as one of one of Saving Our Species program’s 6 iconic species, the malleefowl is also a totem* for many in the Indigenous community and was depicted in some spectacular ground art in a later gathering on-country in September.

OEH Project Co-ordinator Kaleana Reyland said the Culture and Knowledge Day aimed to bring together local people, with diverse ranges of knowledge “to help shape meaningful ways for Aboriginal people and the broader community to get out on-country, reconnect and work together”.

"The malleefowl is struggling to survive, but by taking an Aboriginal Cultural approach, the Project Steering Committee believes the malleefowl will have a much better chance,” she said.

"The majority of members on the Project Steering group are local Aboriginal people from the Mutthi Mutthi, Barkandji/Paakantji, Ngiyampaa and Kurenji Traditional Tribal Groups. Their guidance, networks and knowledge are vital to achieving the project's objectives.”

"To take care of Malleefowl Country we need to bring together Aboriginal Cultural knowledge and values, and science to gain a greater understanding of how to better look after everything. When Aboriginal people talk of Country, we take a holistic view and we mean everything from people down to a little ant or a blade of grass," Mr Kelly said.

As part of the Malleefowl Aboriginal Cultural Engagement Research Project, diverse cultural, scientific and local knowledge is being shared and documented and will be used to shape culturally-tuned activities to help the malleefowl.

The Malleefowl (Leipoa ocellate) is a large, ground-dwelling bird which is endangered in New South Wales. The naturalist John Gould called this bird the 'spotted egg-leaver', a term which describes its appearance and curious breeding habits. The Malleefowl is a strong flyer, but it prefers to run at a fast, lumbering pace if startled.

Threats to the species include loss or degradation of habitat due to clearing or inappropriate grazing or fire regimes and feral predators.

In tandem with the cultural project, SoS are working on malleefowl mound monitoring predator control, and predator monitoring with camera traps. There will be more news on the project in an upcoming newsletter.

The Culture and Knowledge Day was funded by the NSW Environmental Trust with support from the Science Division of Office of Environment and Heritage (OEH), National Parks and Wildlife Services, Willandra Lakes Region World Heritage Area and Western Local Land Services.

*A totem is a natural object, plant or animal that is inherited by members of a clan or family as their spiritual emblem. Totems define peoples' roles and responsibilities, and their relationships with each other and creation.

Help save the Malleefowl (Leipoa ocellata)

This conservation project aims to secure the malleefowl in the wild in NSW for 100 years, engage local communities in its conservation, and encourage the NSW community to identify with it as a flagship for threatened species conservation.