Local 'Phantom' under the spotlight on Threatened Species Day

The elusive Phantom Wattle - a stunning plant found only along the NSW-Victorian border - is the focus of Threatened Species Day in the Southern Ranges Region as the National Parks and Wildlife Service (NPWS) calls on locals to get involved in counting this rare species. 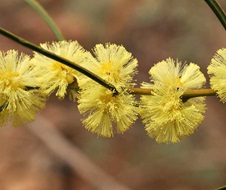 NPWS is rallying community support for a survey on Sunday 10 September that will scour the Basin Creek catchment area of Woomargama National Park, tracking the recovery of this vulnerable plant.

The spectacular shrub, also known as Acacia phasmoides, is making a slow but steady return to glory despite being threatened by floods in 2012.

"This is a great opportunity for eager locals who enjoy a good hike to join our efforts and help protect this rare species.

"It's easy to see why it's called the 'Phantom'. For much of the year it likes to hide from us, but then in spring it'll pop up with a mass of beautiful flowers, making it easier to spot along the rocky creek lines.

"Currently we think it's doing pretty well following floods in 2012 which we feared had decimated the population in the lower catchment areas.

"Since the flooding, NPWS staff and volunteers have been searching the upper catchments of Woomargama National Park and we've found more of the rare plants.

"The last survey estimated there are about 2,500 plants in the Park, which is great news for this species," Ranger Dave said.

Sandy O'Flanagan of Woomargama National Park Volunteers has been working to help restore populations of the wattle since 2011.

"We consider Phantom Wattle to be a local treasure. We're dedicated to protecting and preserving it for future generations to enjoy. So far, it's going well. We've planted hundreds of seedlings back into the population.

"Volunteering is also a great social activity. Our surveys always finish with a famous 'Ranger Dave BBQ' to say thanks to everyone," Mrs O'Flanagan said.

Anyone interested in joining the survey should email: woomnpvolunteers@gmail.com for more information.

Threatened Species Day is celebrated on 7 September each year to raise awareness of plants and animals at risk of extinction and to highlight the work that is being done to save them.