Locals dig in to save critically endangered North Rothbury plant

The population of a critically endangered Hunter region plant has grown by 400 after two successful planting out campaigns by the Office of Environment and Heritage and local volunteers. 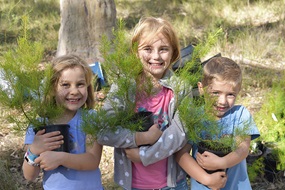 More than 40 volunteers took to their shovels in a community planting day for the Persoonia pauciflora or North Rothbury Persoonia last weekend.

This followed staff from the Office of Environment and Heritage and National Parks and Wildlife Service recently planting 200 of the species.

“There are only 1,000 known North Rothbury Persoonia in the wild, so getting 400 out there is a significant contribution to preserving the species,” Office of Environment and Heritage Senior Project Officer Paul Hillier said.

“As the species recovers, it will become a valuable food source for native bees, grazing animals and fruit eating birds,”

“The program of supplementing the wild population with translocated stock began in 2015, with some experimental planting and as a result, the population has been increased by 700.

“Part of the NSW Government’s Saving our Species initiative, which aims to secure populations of threatened species in the wild, the North Rothbury Persoonia population has now increased by almost 60 per cent.

“A key component of this success is the community really taking up the planting challenge.

“Echoing past years, 42 volunteers came along on Saturday, ensuring the job was done in no time and the volunteers were rewarded with their own Persoonia plants to take home,” Mr Hillier said.

The volunteers were assisted by staff from National Parks and Wildlife Service (NPWS), Australian Botanic Garden Mount Annan and Office of Environment and Heritage (OEH) and representatives from Mindaribba Local Aboriginal Land Council, who also gave a talk on the Cultural significance of the site