Water managers have joined forces to become matchmakers of a kind to maintain flows in the Murray River that support native fish and their habitat. 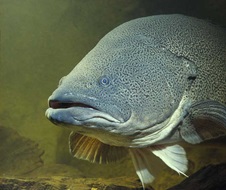 Office of Environment and Heritage (OEH) water manager Paul Childs said river levels have been maintained so native fish can breed using water for the environment to compensate for a drop due to low irrigation demand in early September.

“The release water for the environment ensures flowing habitat is maintained for Murray cod and trout cod during their critical breeding period.

“Murray cod build their nests under snags and raised sections of the river bed which can become exposed when river levels drop unseasonably.

“The water will benefit fish habitat in the Murray through to South Australia, the Edward River, as well as the Gulpa Creek, and help to connect many floodplain creeks along the way,” Mr Childs said.

Commonwealth Environmental Water Holder David Papps said this event was an example of water for the environment being put to good use to give our native fish, including the iconic Murray Cod, the opportunity to breed successfully.

During the October and November cod breeding season, flows downstream of Yarrawonga will be maintained above 8,500 megalitres per day using a combination of water held in storage for the benefit of the environment, inflows from the tributaries located between Hume Dam and Yarrawonga Weir, and operational releases from Hume Dam.

Recreational fisher Phil Beasley said it was imperative Murray cod have a better than average breeding season this year.

“This environmental flow gives the population a chance to begin its recovery,” he said.

Water has been provided by the Commonwealth Environmental Water Holder.

Fish movement is being monitored throughout the event to gauge their response to the flows. This research is funded by The Living Murray program.

The NSW National Parks and Wildlife Service, the Goulburn-Broken CMA and Parks Victoria are also assisting with flow regulation and monitoring within the Barmah-Millewa Forest.