The rugged beauty of the Blue Mountains cliff tops is on track to being more easily enjoyed by visitors with the halfway mark reached on the creation of the new Grand Cliff Top Walk, which will offer spectacular views and a new overnight bushwalk. 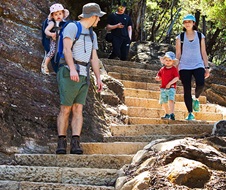 Funded as part of the largest ever State Government investment in visitor infrastructure in NSW national park history, the world-class Grand Cliff Top Walk is on target for completion in 2023.

"Building a track in such rugged areas that 1500 helicopter lifts have been undertaken in the past 12 months to bring in equipment shows how challenging this terrain is," he said.

"So far NPWS staff have crafted 1169 steps and constructed 5121 metres of track designed to blend in with the landscape and eliminate erosion along the paths.

"Once completed this will be an iconic walk that will give access to this beautiful and unique World Heritage area to many more visitors."

Mr Crust said the painstakingly built steps were often carved from stone, in keeping with the area's traditional 100-year-old sandstone paths, and as part of a strategy to future-proof the track against damage from bushfires.

"The Blue Mountains National Park has some of the oldest and most popular bushwalks in Australia and is the most visited national park in New South Wales," he said.

About the Grand Cliff Top Walk