The magpie breeding season is in full swing across the local area. The season, which generally runs from the end of August to November can be a stressful time, as some outdoor areas become no-go zones as dive bombing maggies stake out their territory. 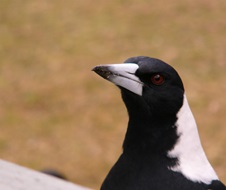 “For most of the year magpies are welcome neighbours helping control garden pests and filling our ears with their beautiful song,” Mr Evans said.

“However for around six weeks of the year some male magpies become aggressive and swoop anyone who enters the territory where they are nesting.

“This can be alarming for people but being tolerant and avoiding areas where magpies are known to swoop is the best way to evade conflict between you and these native birds.

“Remember that magpies are a protected species and it is an offence to harm them.”

Some simple and effective steps to avoid being swooped include:

“The most important thing to remember is that magpies are protected native birds and by harassing them they only become more distrustful of humans.

“They are only being responsible parents protecting their young from perceived threats.

“Usually, they are just giving us a warning and generally only defend within 100 metres of their nest site,” Mr Evans added.