Community feedback is being sought for the proposed construction of a new coastal walking track for the eastern section of Malabar Headland National Park. The track will connect Maroubra and Malabar Beaches and include look outs and rest areas, as well as a heritage loop track which would pass by World War II heritage structures. 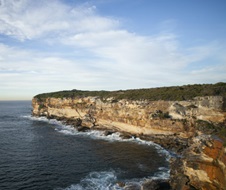 A design concept for the walking track network has been prepared and the National Parks and Wildlife Service (NPWS) will consult with key stakeholders, including local residents, the Friends of Malabar Headland and the La Perouse Local Aboriginal Land Council prior to the completion of a final design. In the meantime, NPWS has installed a temporary walking track to allow for public access, when the park is open to the public.

NPWS Regional Manager Peter Hay said the NPWS was keen to hear from the community on the proposal and that all comments would be considered in finalising the walking track design.

“NPWS is proposing to construct the ’Boora Point Walking Track’, about 3.7km in length that will offer stunning ocean views across Malabar Headland to Maroubra Bay and beyond as a primary means of access to the newly declared eastern section of Malabar Headland National Park, when the park is open,” Mr Hay said.

“The track will also connect Malabar and Maroubra beaches, providing an important new link in the Eastern Beaches Coastal Walk. It has also been designed to allow formal access while protecting the endangered Eastern Suburbs Banksia Scrub ecological community, which is present in the park.

“It is important that the local community is aware of this project, so they can have a say and I encourage anyone with an interest in the park to take advantage of the consultation period.”

NPWS is committed to engaging with the community in the final design of the walking track and is seeking feedback through a variety of ways.

The planned community engagement includes a letterbox drop to local residents, an email to all identified stakeholders, information on the NPWS web page with links to plans and an email address for feedback. There will be an opportunity to view concept plans and discuss with NPWS staff on Saturday 9 July, between 9am and 11am on the Maroubra Beach Promenade opposite McKeon Street.

The plans can also be viewed online and feedback given at Have your say on NSW environment and heritage by filling in the online form, sending an email to MHNP.walkingtrack@environment.nsw.gov.au, or by mail to: