A man has been fined $4,300 and ordered to forfeit weapons and ammunition worth more than $15,000 after he was caught illegally hunting in Towarri National Park. 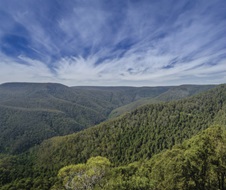 The individual was sentenced in Newcastle Local Court late last year with offences including carrying and possessing firearms and illegal hunting. The man also received two 24-36-month community correction orders for possessing an unregistered gun and a sound suppressor.

“NPWS and DPI used an extensive, joint electronic surveillance program, including installation and regular monitoring of a network of cameras across Towarri National Park, which identified the offender and enabled the NPWS, DPI and the NSW Police Rural Crime Investigators to pursue a prosecution," said Mr Signor.

“We’re pleased with the outcome of this prosecution and hope that it sends a strong message to the community that illegal activities are not tolerated in our parks,” said Mr Signor.

Two separate instances of illegal activity resulted in court appearances and fines in the last six months. A man was sentenced by the Taree Local Court and fined $1,500 after he was captured on camera carrying a firearm on a fire trail in Barrington Tops National Park, while another was fined and placed on a good behaviour bond for vandalising park property to access closed areas.

NPWS will continue regular surveillance and patrols of national parks in the region to targeting illegal hunting, vandalism and trail damage.

“It’s especially important that we stop damage to fire trails in wet weather. Damage from unauthorised use can be very expensive to repair, and we need those trails to be available to help us manage risks of bushfires,” said Mr Signor.