Meet the Providence petrel: a charismatic seabird with some curious behaviour

It's World Migratory Bird Day. Find out more about the Providence petrel (Pterodroma solandri) that flies a migration route longer than any passenger jet and makes an adorable but clumsy crash landing when you call it. 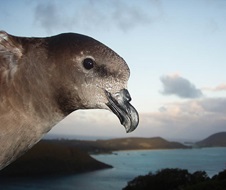 From April to October on Lord Howe Island, 600 kilometres off the east coast of Australia from Port Macquarie, tourists venture out to the Far Flats to see the spectacle of tens of thousands of Providence petrels circling and then dropping from of the sky into the forest below to the sounds of war-whoops (when you call loudly and pat your mouth with a flat hand) from people.

It's a curious phenomenon, one even David Attenborough has marvelled at. We caught up with our resident seabird expert Nicholas Carlile who has been studying seabirds in New South Wales for over 30 years to find out more about this incredible threatened species.

How would you describe Providence petrels?

Providence petrels are a robustly built petrel. They look somewhat like a large seagull, but they are a tube-nosed pelagic seabird which means they feed exclusively on the open ocean and only come to land to breed.

The species is dark grey with a brown-grey head with fine, white scalloping on the face and triangular cream patches under the wing. Its bill is stout, black (and wickedly hooked), the eyes are dark brown, and the feet are generally black, sometimes with pale grey webbing. They are listed as a vulnerable species in New South Wales.

Tell us about the history of Providence petrels and why they are vulnerable?

Lord Howe Island has a population of around 32,000 pairs of Providence petrel. They nest on the tops and slopes of Mount Gower and Mount Lidgbird. On Lord Howe Island, their numbers have increased since the removal of pigs and are expected to recover further when rodents are officially declared eradicated from the island sometime in 2022.

'Birds of Providence' was the name given to them on Norfolk Island, where they are now extinct. A small population of 200 pairs still breed on Phillip Island, a tiny island located 6 kilometres south of Norfolk Island and 900 kilometres to the north of Lord Howe Island, in the Southwest Pacific.

When supply ship HMS Sirius was shipwrecked on Norfolk Island in March 1790, an extra 358 hungry mouths joined the newly established colony. Several million Providence petrels gave them a food supply to sustain the colony, and in 1790 alone over 435,000 birds were harvested. Subsequent harvesting and the release of pigs into the natural environment on Norfolk saw the extinction of the petrels by the early 1800s.

Providence petrels are listed as vulnerable due to their small range, being confined to one very small island and one tiny islet. They are therefore susceptible to the impact of sudden events.

What are Providence petrels doing this time of year?

October marks the month of the year when Providence petrel chicks emerge from their burrows for the very first time to begin exercising their wings to build flight muscles. Soon after, the fledglings leave the island for the first and only time. They simply get off the ground and fly off – with no test flights. They start their journey from the main nesting area on Lord Howe Island, heading out somewhere into the north-west Pacific and staying at sea for at least 5 years. This is not at all unusual for seabirds like petrels and albatross.

When do they return to breed?

Young Providence petrels start returning to Lord Howe Island from mid-April, and often land right at the site where they fledged from. They then find a mate and dig a deep tunnel 1 to 2 metres in length using their powerful legs and sharp claws, lying on their sides to excavate. After lining the nesting chamber at the end of the burrow, they lay a single egg, which is not replaced in that season if broken.

Why do they drop to the ground in response to loud noises?

The behaviour of the birds to respond to loud noises over the breeding sites, particularly the war-whoop calling of people, is likely to do with the breeding advantage of being attracted to loud noises. This strategy is more likely to assist you in finding a mate, particularly in thick forest when finding a mate by sight alone might be problematic.

It is highly likely that the birds that 'land at your feet' are non-breeding birds looking for mates. Later in the season, when it's mostly breeding birds about, it is much harder to get birds to alight on the ground from 'war-whoop' calling.

Providence petrels are not the only species of petrel to do this, but they are probably one of the more dramatic as they arrive on islands in daylight, meaning the spectacle is more obvious.

Where do they go when they aren't breeding on Lord Howe Island?

It is not currently known where the Providence petrel fledglings spend the first 5 years of their lives.

Scientists have been using light loggers to track migratory birds for some time. These devices are essentially a lightweight, electronic tracking device used to map migration routes. They are attached to a band on the bird's leg and use a geolocator which periodically records ambient light level as the bird flies to determine its location.

We have been tracking male and female pairs of Providence petrels in their movements around the Tasman during the breeding season and their migration paths, and their main area of non-breeding movements off Japan.

Why don't migratory seabirds get tired travelling such far distances?

It is pretty amazing to think the Providence petrels only touch the land on Lord Howe Island and nowhere else in the world.

What we found from our tracking was that they only return to land after 18,000 kilometres of flying. That's further than flying non-stop from Sydney to London and further than the world's longest long-haul flight from Singapore to New York. These are straight-line distances between the core breeding and core non-breeding areas, and amazingly the total area flown by the birds is even longer.

Seabirds are designed to fly long distances. With light hollow bones they manage their energy expenditure, so they don't get tired, by reducing air resistance and lowering the number of wing beats. Some even sleep mid-flight. While they do rest on the water, particularly at times of low wind, they are capable of feeding at day or night, with their large eyes and keen sense of smell assisting them in locating their prey of squid and fish.

To learn more about this curious seabird visit its threatened species profile.

Meet the Providence petrel: a charismatic seabird with some ...

Saving our Species: Working together for a greater impact

Saving our Species: Securing a future for NSW threatened pla...

Transform yourself into a threatened species with our social...