Meet the women working to save our species

11 February is the United Nations’ International Day of Women and Girls in Science. To promote equal access to and participation in science for women and girls, we’re profiling some of the dedicated women who play a critical role in Saving our Species (SoS) – the NSW Government’s flagship threatened species conservation program.

With women working across NSW to protect our threatened species, SoS is full of interesting and passionate women who inspire the next generation of women and girls in science. 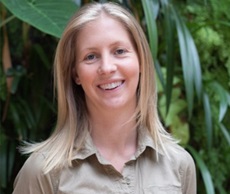 Dr. Madelaine (Maddie) Castles is a Threatened Species Officer with the NSW Government’s Saving our Species (SoS) program. She holds a Bachelor of Science (Hons) from ANU and a PhD in Ecology and Animal Behaviour from UQ. Prior to joining SoS she lived in Namibia, Africa, for 2 years, working in giraffe conservation.

Maddie’s advice for young women interested in science is to stay curious, ask questions and volunteer to help you decide what you really enjoy. She also says that for young women starting out, applying for jobs in rural locations is a great way to get experience in the conservation industry and gives you the opportunity to be involved with a broad range of projects occurring over a large geographical area. 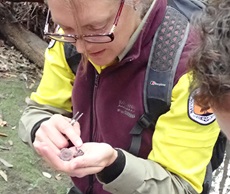 Meagan Hinds doesn’t think of herself as a scientist. She trains young scientists, conducts scientific monitoring of threatened species and works with community partners to implement management actions, informed by science, to save threatened species.

As a project coordinator for SoS, Meg coordinates projects for 2 threatened plants, the broad-headed snake, the southern brown bandicoot, 9 species of threatened fungi and an endangered fungi population.

While coordinating the NSW southern brown bandicoot program, Meg focuses her on ground efforts on monitoring the small population remaining in Northern Sydney. Meg co-developed and coordinates the use of remote camera traps targeting bandicoots across Ku-ring-gai Chase and Garigal National Parks. 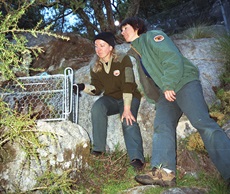 Where can an environmental science or zoology degree take you? Michaela Jones’ studies have led her to plan and coordinate the current drought and fire crises for one of our most iconic threatened species, the brush-tailed rock-wallaby, for the last 20 years.

As a conservation officer, her ecological knowledge and project management skills help with planning and coordination, but Michaela has also worked as a ranger. This means she has specialised fire training and, along with only a few other SoS project officers, is able to go into areas soon after they have been burnt to safely assess the impacts on threatened species.

Recently, Michaela has been setting up food and water stations for the Jenolan population, while the rock-wallabies wait for their preferred food plants to regenerate. At Jenolan, individual rock-wallabies are marked, so by putting in camera traps around water points, Michaela could confirm in a very short time that at least a third of the population had survived. 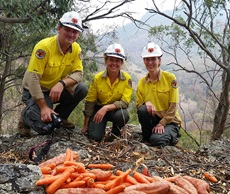 Katherine Howard has a zoology degree and graduate qualifications in ecological conservation, but she lists stakeholder liaison and project management as the most important skills for her job as Senior Project Officer for SoS.

In January, Kath worked with colleagues and partner organisations Aussie Ark, WWF Australia, Woolworths and FoodBank to assess the state of intensely drought-affected rock-wallaby habitat in Curracabundi National Park and the Watagans National Park, and then to supply short-term supplementary food by ground and air.

“Luckily, these two parks haven’t burned this season as so many other rock-wallaby sites tragically have, but Curracabundi in particular has been hard hit by drought,” Katherine says. “The Barnard River dried up to just a handful of rapidly shrinking pools, and everything in the park from grasses to mature trees was dead or dying. It was distressing to find emaciated and dead animals – which are also victims of the drought. It’s been very satisfying to work with our generous partners to provide carrots and sweet potatoes to tide them over until the rains arrived.”

Volunteers can solve conservation crime scenes, from the lux...

Drones and phones: technology zooms in to help Saving our Sp...