A lost population of a vulnerable little native mint-bush has been found alive and well after 50 years of searching in Royal National Park on the southern edge of Sydney. 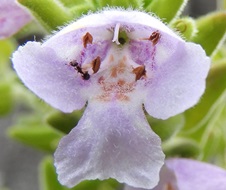 The villous mint-bush (Prostanthera densa) was assumed lost, dead, or mis-reported from its last sighting in 1972 but has since been found 'flying under the radar' all this time, thanks to a project led by the NSW Government's Saving our Species (SoS) program.

In 2015 SoS began working with National Parks and Wildlife Service (NPWS), the Royal Botanic Gardens, and volunteers from the Australian Plant Society (APS) to conserve them.

While randomly bushwalking in Royal National Park during lockdown last winter, an APS citizen scientist had an inkling that mint-bush might like the area he was in.

Looking closer, he realised he'd happened upon the mint-bush in flower, well away from the known small populations amid rocks on coastal headlands in Royal National Park.

The mint-bush had survived in the centre of Australia's oldest national park less than an hour's drive from Sydney's CBD, despite bushfires and browsing feral deer.

A formal plant survey followed, with the discoverer leading the way to a record number of individual plants said Dan Clarke from the Australian Plant Society.

"What an exciting moment for citizen science," Mr Clarke said.

"It's terrific that one of our APS members found it after years of being involved in the project. Our team had previously searched this area in a bid to solve the 1972 mystery, but the plant had eluded us."

NPWS senior project coordinator Michael Wood said he and Saving our Species project partners were delighted with the find, which provided a greater level of security for the species' longevity.

"Royal remains a strong biodiversity hotspot for the conservation and preservation of native species – as well as a great destination for millions of visitors! One can only wonder how many other secrets are in store for us."

UNSW Sydney Professor of Botany David Keith said the find showed the significance and resilience of Royal National Park as a refuge.

"Royal might be better known as Australia's oldest national park and as Sydney's major outdoor destination, but with more than 1100 different plant species in just 15,000 hectares its diversity is unrivalled virtually anywhere else in the world."

For more information on this plant: Villous Mint-bush – profile