A detection dog, Missy, has been assisting Saving our Species’ ecologists to find and uncover the rare underground orchid, Rhizanthella sp. 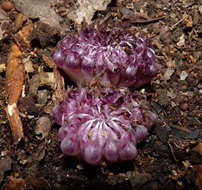 In Barrington Tops National Park the first field trials have confirmed the success of a new orchid survey method. Missy the detection dog can successfully find the underground orchid, Rhizanthella sp. These plants are also being investigated as a potential new species.

Saving our Species project officer, Paul Hillier says ‘This is an incredibly exciting discovery to find a possible brand-new species and possibly very rare plant. It is hard to find because it is nearly always covered by leaf litter.

It took less than 10 minutes for Missy the detection dog to confidently show the experts where the orchids were. Saving our Species and National Parks and Wildlife staff can spend up to 10 days to get the same result. Missy found remnants of the season’s last flowers hidden under leaf litter at a known location. She may have also found orchids growing in a new location, however no flowers were seen at the new site. They will return in winter when Rhizanthella flowers start emerging again.

This new survey method opens up a door to finding other species that until now have proved a challenge to work with and conserve.