Montague Island will be featured in a new UK documentary series that sees professional British pest controllers travel to Australia to learn from the 'best of the best' - the NSW National Parks and Wildlife Service (NPWS). 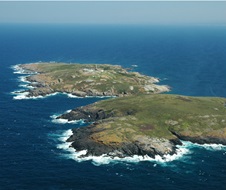 “The Island has been pest-free since 2007 and it was a fantastic opportunity to be able to showcase our work and flattering to hear NPWS described as the best of the best when it comes to wildlife management and conservation,” said Mr Cope.

“More than 30,000 shearwaters, crested terns and little penguins nest and breed on Montague Island, making it one of the most significant seabird areas on the east coast of NSW.

“The film crew were genuinely interested to hear about our Seabird Habitat Restoration Project, particularly the way we are tackling weeds such as kikuyu grass that is impacting seabird nesting and breeding.

“The film crew also captured some fantastic footage from the top of the lighthouse highlighting the positive impact of our revegetation efforts.

“For the past 12 years NPWS had been progressively removing the kikuyu grass and replacing it with the types of native vegetation that the sea birds love.

“From the lighthouse I could point out the section of the Island that we are planning to treat in the coming months.

“The northern section is inaccessible to vehicles so in May we will be using a helicopter to do spot spraying and have arranged for a remote spraying system to be set up on the Island for follow up ground works with our staff,” Mr Cope said.

Penny Beaver associated with the University of Tasmania was also on the Island surveying Wedge Tailed Shearwater (mutton bird) chicks.

“The highlight of the day was watching the UK workers’ reaction to Penny as she removed one of the Shearwater chicks from the burrow for analysis,” said Mr Cope.

“They were gobsmacked to see what they described as ‘tiny balls of fluff’ emerging from underground.

“It was clear that the landscape and the issues we deal with were ‘foreign’ to the UK crew, but what was familiar is their respect for the environment and dedication to conservation,” Mr Cope said.

The series titled Simply the Pest is expected to be broadcast in the UK in May 2016 with international screenings to follow.

The new year kicks off the beginning of the NSW National Par...