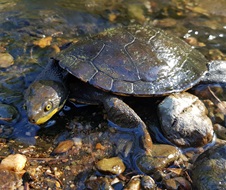 Office of Environment and Heritage (OEH) researcher, Andrew Steed, said the survey’s results brought the number of the turtles to 275 at 86 sites over two years which meant there was a good future for the turtles.

Mr Steed said: “This is very good news for the species which have been around for over 55 million years and is the ancestor of virtually all Australian Turtles.

Mr Steed said: “With great community support, three ecologists in 2018 surveyed the river and its tributaries, including remote areas not previously checked and found 87 turtles.

“This year’s surveys in March and April found a further 188 turtles at 47 sites, including a new location upstream of Gloucester in the south of the Manning valley”

“This means turtles are living in new locations, a good sign that they are defying the odds and populating different river systems, making the species less susceptible to extinction”.

“The turtles were also recorded in four conservation reserves, three of which are new locations for the Manning River Helmeted Turtle.”

The NSW Government’s Saving our Species program has provided $80,000 over 2018 and 2019 for these surveys. This funding has increased OEH’s ability to understand the threats to these endangered turtles and ensure the development of positive conservation actions.

Over 75 landowners in the valley kindly gave permission for researchers to access the river through their properties helping to make the surveys a success.

“The community will be very happy to hear these positive results. Residents of Manning Valley are committed to the protection of the Manning River Helmeted Turtle, and have formed the Manning River Turtle Conservation Group,” Mr Steed said.

A conservation workshop will take place in Wingham, NSW on June 6-7 to develop management strategies to secure the turtle’s long-term future. This workshop is supported by OEH, Hunter Local Land Services and the MidCoast Council.

The Manning River Helmeted Turtle was listed as endangered in 2017 when the population declined due to threats from foxes, pigs and other forms of habitat degradation.