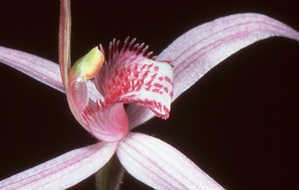 National Parks and Wildlife Service Ranger Steve Woodhall said the results captured over several surveys were largely thanks to the efforts of local NPWS staff and volunteers of the Orange Field Naturalist and Conservation Society.

“More than 70% of Mount Canobolas State Conservation Area was affected by an intense bushfire in February 2018.

“While this fire impacted the community and the park heavily, 2 years later we have emerged with new knowledge about what exists in this unique ecosystem.

“Most exciting has been the identification of two new ground orchid species, the pink spider orchid and the Canobolas leek orchid.

“The Canobolas leek orchid hasn’t been seen since the last major fire back in 1982 – at that time it remained an undescribed species.

“These new species are only known from Mount Canobolas.

“In total 79 new species have been recorded in the park including birds, reptiles, mammals, amphibians invertebrates, plants and fungi.

“The number of known flora and fauna species has now risen to more than 950 species.

“The results have come from surveys of 24 permanent vegetation and fauna monitoring sites which have been established in the park post-fire.

“NPWS and the Orange Field Naturalists over 1200 volunteer hours have conducted spring and autumn fauna and vegetation surveys as well as surveys for orchids, heath plants, insectivorous bats and Aboriginal sites.

“While the park is only in the early stages of recovery, it is pleasing to see the animals and insects slowly returning to the burnt areas.

“The trees are sprouting new growth, the ground vegetation is coming back and I’m glad to see that the special species have survived the fire”.

“Mount Canobolas is home to 13 state and federally listed threatened species and Endangered Ecological Communities. Some of these like the Prostanthera gilseii and silver leaf candlebark are endemic to the park and are found nowhere else.

“The post fire work has identified a further 22 species and ecological communities potentially worth exploring for listing,” Mr Woodhall said.

Images: Mt Canobolas 2 years after fire (please use with acknowledgement)