The $2.94 million redevelopment of Mount Canobolas visitor facilities has reached a high point with the summit now open. 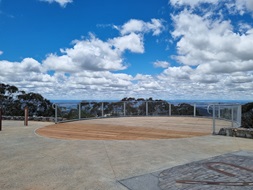 'We know taking a trip to the summit is a favourite pastime of locals and visitors alike, attracting around 75,000 visitors annually, peaking during the COVID-19 pandemic at around 200,000 visits,' Ms Buchanan said.

'The completion of works means the incredible views are now more accessible for everyone.

'It also includes a stunning ground mosaic based on the work of local Aboriginal artist Mick Crook.

'The summit upgrade follows on from recent improvements to the Walls lookout and Towac picnic area, including new picnic tables and upgraded car parks.

'The visitor facilities at Mount Canobolas were first built in 1974 and the redevelopment is ensuring NPWS can sustainably manage increasing numbers of people coming to enjoy this spectacular reserve.

'Our improvements are ongoing. The next project will be the $350,000 upgrade of the Federal Falls walk set to be completed next year,' Ms Buchanan said.

The latest NPWS research shows that visitors to national parks contribute more than $215 million to the Orange economy annually and generate more than 600 direct and indirect jobs for the region each year.

The Mount Canobolas State Conservation Area redevelopment is part of the largest investment in visitor infrastructure in national parks history – $450 million for more than 200 visitor projects across the state.

It builds on the $17.9 billion and 74,000 jobs national parks already contribute annually to the state’s economy and is supporting NSW communities to recover in the wake of droughts, bushfires, floods, and the pandemic.