The Mount Keira Ring Track in the Illawarra Escarpment State Conservation Area has reopened as a loop walk after it was partially closed due to large rock falls. 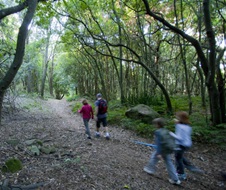 "Safety is the highest priority for NPWS which is why the north-eastern section of track was closed while rockfall hazards could be properly addressed. We thank park visitors for their patience during the closure," said Mr Bush.

"Work focused on two sections of track and the adjacent cliff lines. A long section of walking track was re-routed to avoid a rock fall zone. In the second section, the cliff lines above the rock affected section were stabilised and the track was rebuilt to make it easier for walkers.

"Mount Keira is significant to Indigenous peoples and so work was carried out by NPWS in conjunction with a team from Berrim Nuru, the environmental services arm of the Illawarra Local Aboriginal Land Council."

Mr Bush said the stabilisation work was complex but, with more than 100,000 visitors to the Illawarra Escarpment each year, it is imperative known hazards are properly managed.

"New safety and directional signs were installed at the track heads and along the track.

"We encourage people to visit the newly-opened Mount Keira Ring track to enjoy the rainforest and amazing views across Illawarra's picturesque coastline.

"The 5-kilometre circuit which includes a colonial road constructed by Major Thomas Mitchell in 1834, takes 2-3 hours to complete and is suitable for walkers with a reasonable level of fitness. Highlights include lush rainforest and panoramic views.

"It's one of the most prominent and popular walks in the Illawarra Escarpment area due to its proximity to the CBD and Wollongong and encompasses the most dominant feature of the area, Mount Keira," said Mr Bush.