The endangered Mountain pygmy-possum is one of NSW's more unique species because they can only survive in sub alpine and alpine areas between 1200 to 2228 metres above sea level. Adding to this, the total population size of this endangered species in NSW is less than 1000 adults. Two of the 4 main sub-populations in NSW are found within ski resort areas. 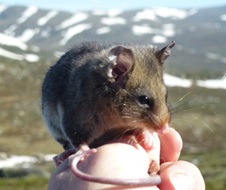 “These possums, which are about double the size of a common house mouse, are the only Australian marsupial to hibernate under the snow in winter and for long periods of time,” said Dr Linda Broome, Saving Our Species senior threatened species officer.

Survey results from November last year, the 30th year of monitoring surveys by a group of dedicated volunteers, have shown the endangered Mountain pygmy-possums are once again flourishing in the Snowy Mountains. Last year’s survey across five monitoring sites revealed a total of 165 Mountain pygmy-possums: 105 females and 60 males demonstrating stable, and in some areas, growing populations of the unique marsupials.

During each annual survey up to 20 devoted volunteers spend 10 days setting and checking traps loaded with walnuts which the possums cannot resist. The team note animals that have been microchipped, before carefully chipping and registering new animals, and recording measurements including sex, body weight, reproductive condition (including pouch young) and parasites.

The work led by the NSW Office of Environment and Heritage and its National Parks and Wildlife Service under the Saving Our Species program, is believed to be one of the longest running fauna monitoring projects of its kind in the world.

Watch and learn more about conservation efforts to save this species!