Mulgara in the media

A Crest-tailed Mulgara, presumed extinct in NSW for more than century, was discovered late last year in Sturt National Park. 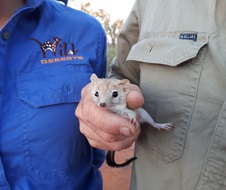 The marsupial was spotted by researchers from University of New South Wales (UNSW) Sydney’s Wild Deserts project. The Wild Deserts project contributes to Saving our Species (SoS) and is contracted by the Office of Environment and Heritage to restore and promote desert ecosystems in the Park. Read more in UNSW news.

Focus on the small mammal had already been planned through the Reintroduction of Locally Extinct Mammals Project partnership between SoS and the University. Key Wild Deserts project researchers Dr Rebecca West and Reece Pedler will continue to monitor the area for additional signs of establishment.

Find out more about the Crest-tailed Mulgara in our Featured species item in the SoS newsletter: summer edition.