Mungo Man and Lady to finally rest in peace

More than 40 years after Mungo Man, Mungo Lady, and the ancestral remains of 106 others were removed from their resting places, the Australian Government has approved their reburial on country. 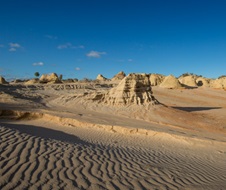 Minister for Environment and Heritage James Griffin has welcomed the decision by Australian Environment Minister Sussan Ley to allow the reburial of the remains.

'I met with the traditional owners of Willandra Lakes in March to hear their stories about how long they've been waiting to rebury their ancestors,' Mr Griffin said.

'I can't imagine the grief they've experienced in this process, especially considering some of the elders who fought for the return of these remains are no longer with us.

'While the discovery of Mungo Man and Mungo Lady helped scientists establish that Aboriginal people have been in Australia for more than 42,000 years, it's time to let their spirits rest in peace.

'I wholeheartedly support the Australian Government's decision, and I hope it provides some comfort for the Barkindji/Paakantji, Mutthi Mutthi and Ngiyampaa people.'

The remains of Mungo Man, Mungo Lady and 106 others were discovered in Willandra Lakes and Lake Mungo between 1960 and 1980, and removed without permission from traditional owners.

While the remains were returned to traditional owners by academic institutions, they haven't been able to rebury their ancestors on country in Mungo National Park without Australian Government approval.

Mungo National Park is a UNESCO World Heritage Site, and reburial is considered a 'controlled action' that requires approval under the Commonwealth Environment Protection and Biodiversity Conservation Act 1999.

Minister for Aboriginal Affairs Ben Franklin said reburial is the final stage in the return to country of the ancestors that are held in secure storage at Mungo National Park.

'Aboriginal people have consistently fought for the remains of their ancestors to be returned to their rightful resting place,' Mr Franklin said.

'The reburial will allow Mungo Man and Mungo Lady to rest with their kin, their ancestors and their country.'

AAG Chair Patsy Winch said she was happy and relieved the right decision has been made.

'Finally, after all that time has passed, the voices of the Elders have been heard and I am thankful that these ancestral remains will finally be laid to rest the traditional way, in Country,' Ms Winch said.

'I would also like to offer thanks for all the hard work that everyone has put in to reach this moment. That includes the members of the Aboriginal Advisory Group and also all the government departments who have been involved.

'I look forward to future projects where we can work together in a spirit of respect and harmony with the scientific and university communities in the Willandra Lakes and Mungo National Park.'

The NSW Government will support the reburial through Heritage NSW and the National Parks and Wildlife Service, in accordance with the wishes of traditional owners.

The reburial project was the subject of extensive community consultation. A summary of the public submissions received is available on the Heritage NSW website.