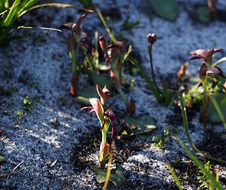 Those lucky enough to experience the remote tranquillity and raw beauty of Nadgee would agree that it is a wild and special part of the world – a place that needs gentle care and respect. It's also a place that's very dear to the Saving our Species program.

Nadgee's conservation significance doesn't stop with the habitat it provides for the many plant and animal species that call it home – the reserve has also long been a centre for scientific discovery.

A living experiment and study site for famous long-term research, over the last 50 years Nadgee has provided a wealth of knowledge on the ecology of small mammals and coastal heathland birds – including their ability to recover from bushfires.

The diverse coastal heaths, or moors, are a notable feature of Nadgee. These dense, prickly patches of low-growing shrubs provide crucial habitat for 2 threatened birds; the endangered eastern bristlebird and the vulnerable eastern (or mainland) ground parrot. Since 2001 the Nadgee Rangers and other threatened bird experts from the Department have been counting the number of birds along the walking tracks at the 3 main moors – Impressa Moor, Nadgee Moor and Endeavour Moor.

These delicate coastal heathlands had not been burnt for 40 years. On the last day of summer 2020, this all changed as a catastrophic fire event tore through Nadgee and burnt all the moors.

The months after the fire

Until the 2020 fire, numbers of both bird species had been increasing since about 2004, as the heath grew older and older. Sensitive management of the reserve by National Parks and Wildlife Service (NPWS) staff (including limiting the number of visitors to the delicate heaths) has allowed the bristlebirds and ground parrots to flourish.

When their habitat was severely burnt, there were concerns that they might struggle to survive the fire and to recover afterwards. Back in May, only 3 months after the fire, Ranger George Malolakis and Threatened Species Manager Damon Oliver made a rapid assessment of the burnt forests and coastal heaths.

They were amazed at how rapidly the vegetation had regenerated in such a short time, thanks to some very good rainfall. Despite their optimism, only a single bristlebird was heard calling way down at the very southern end of Nadgee in a patch of unburnt dune scrub. A few ground parrots were also seen in the first few months after the fire by ecologist and colleague Andrew Claridge, but there was much uncertainty to the fate of both species during and after the fire.

Fast forward to early September 2020, still only 6 months since the fire, George, Damon and a team of eager ecologists spent 4 days at Nadgee to see what recovery had occurred since May. Their first night was spent camping in the forest which was only moderate burnt. Many small forest birds were seen and heard in the early morning and overnight the strident calls of the threatened yellow-bellied glider could be heard in the enormous monkey gums that grow along the Nadgee River.

Over the next 3 days the team focused on the coastal heaths, based from a camp at Nadgee Lake, whose water levels were the highest seen in years and close to breaking open into the sea. Conducting early morning transect walks to count eastern bristlebirds, a new transect added to the existing 4 previously surveyed for nearly 20 years. In the early evenings after sunset, the teams braved the ferocious mosquitos and staked out 6 sites to listen intently for the very high frequency ascending calls of the ground parrot.

A process of recovery

So what did they find? Much to the surprise and relief of the team, the eastern bristlebirds were back calling at all the burnt heaths, and were in good numbers at some of the less burnt refuges along drainage lines and edges of forest. The team counted 35 bristlebirds in total, and while this is a lot lower than the previous count before the fire, it's still close to the 2004 densities. This provides a great deal of hope that this species will recover steadily as their heath habitat regenerates in the next few years.

It once again demonstrates the resilience of Nadgee to wildfires – it was totally burnt in 1972 and then well over half burnt again in 1980. On both occasions, bristlebirds were able to recover.

The results for ground parrots were opposite to what the team anticipated. Based on other ground parrot post-fire observations at other NSW populations, which showed the species can re-occupy burnt habitat very rapidly, only 4 parrots were heard or seen for the entire trip.

The lack of food, primarily grass and sedge seeds, was the likely reason for such low numbers. The team expects ground parrots back in higher numbers as the resprouting grasses and sedges flower and seed in the next 6 to 12 months, so come late summer there will be more ground parrot surveys to measure their recovery.

While the team were counting bristlebirds and parrots, they were rewarded with other threatened species discoveries of a powerful owl in unburnt forest, striated fieldwrens and white-fronted chats on the heaths, Littlejohn's tree frog in the upland heaths and a new record of the endangered thick lip spider orchid whose closest population to Nadgee is over 200 kilometres away. When the team had time to glance offshore, they were treated to the amazing spectacle of migrating pods of humpback and Bryde's whales and bachelor groups of New Zealand fur-seals with one flipper out of the water to keep cool – quite extraordinary sights indeed. Nadgee is such an important area to keep wild and untouched for generations to appreciate and respect.

Endangered frogs leap on a lifeline