The National Parks and Wildlife Service (NPWS) is calling for information on two bow and arrow shooting attacks on native brush turkeys in the Byron Bay area. 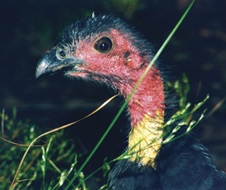 Another attack left a second brush turkey badly injured with an arrow through its body for 5 weeks before it was captured by WIRES, treated by a local vet and successfully released.

"They are a valuable part of our natural environment and are amazing survivors, transcending the loss of huge amounts of their habitat to thrive in city and urban areas close to cars, dogs, cats and people.

"Brush turkeys are Australia's largest megapode, an ancient family of birds dating back 30 million years. The males construct mounds to incubate their eggs.

"This is a primitive nesting behaviour and we are so lucky to be able to watch nature in our neighbourhood.

"The males tend to the nest and when the chicks hatch it takes them two days to scratch to the surface after which they are on their own with no help or protection from the parents.

"We know some people find them annoying in their gardens but the mounds they build for mating and nesting can be used for a large supply of natural compost once the chicks have hatched and the mound is abandoned.

"They are a quirky and delightful bird to have around and apart from a bit of ad hoc construction work in the garden, they cause no harm.

"There is no excuse for cruelty and we are actively investigating the attacks on these two birds.

"If you have seen something on social media, overheard a conversation or witnessed something related to these incidents, please let us know.

"Individuals responsible for these attacks can face fines of up to $22,000," Miss Markovina said.

In the nick of time – seedlings of rare fire-impacted Mt Iml...