Threatened species experts to inspire you this National Science Week

Conserving threatened species in NSW is no easy feat. That’s why the Saving our Species program uses experts to consistently deliver practical actions that benefit our at-risk plants and animals.

We’re particularly proud of our world-leading approach to science and research. For this year’s National Science Week, we invite you to learn more about some of our threatened species experts at the front-line of conservation.

These 5 Saving our Species team members work across NSW to secure a future for a wide variety of species, from the Cumberland Plain land snail to the small rainforest tree, coastal fontainea.

When Vera was young, she wanted to be an archaeologist, inspired by what she saw as an exciting combination of treasure hunting, science and adventure. Vera’s childhood plans may have gone in a different direction, but her role in threatened species conservation in the Cumberland Plain is a dream job for her.

Vera’s been a Saving our Species Project Officer for 5 years and has worked for the NSW National Parks and Wildlife Service for 20 years. Vera draws on her experience in science to protect threatened species and threatened ecological communities for the future. She and her team use the full conservation toolbox to find innovative, daring and creative healing solutions to ongoing challenges. These include pest control, vegetation management, ecological/cultural burning and habitat restoration.

Vera specialises in some of the most endangered ecological communities and species in the world like the Cumberland Plain land snail, and using the fundamentals of science ensures her actions make a tangible difference to their continuing survival.

‘The most rewarding part of my job is observing the beauty of the world around me, learning about the complex environment we live in and knowing that I am making a long-term meaningful difference.’

From taking measurements of a spotted-tailed quoll on her knee (while avoiding those ferocious jaws) to watching greater gliders glide above her during fauna surveys, Vera’s work in science is varied and deeply fulfilling.

‘I love the diversity and importance of the work I do.’ 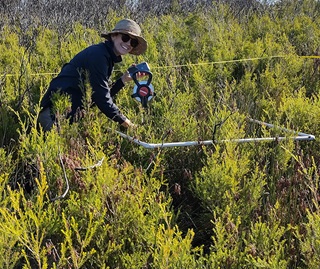 Katie tries not to gloat too much about her job, but we really couldn’t blame her if she did. Responsible for a range of threatened species conservation projects, Katie gets to visit some awesome places and says her job doesn’t really feel much like work at all.

Growing up with childhood dreams of becoming a vet, park ranger or Totally Wild presenter, Katie got into conservation after volunteering, studying environmental science and surrounding herself with lots of great people she could learn from. She’s been working in environmental science for 12 years.

‘The best part about working is science is getting to ask questions. Discovering new things about a species I’m working on never gets old. I also love working with people and being reminded of the positive impact small communities can have.’

Based in Newcastle, Katie’s job with Saving our Species sees her travelling across the Hunter and Central Coast regions to work on plant species like Denman pomaderris, Lindernia alsinoides, Eucalyptus castrensis, Eucalyptus pumila and Lasiopetalum longistamineum.

‘These species occur in some visually stunning habitats and there’s very little that’s known about many of them, so there are lots of knowledge gaps to fill,’ Katie says.

Katie fears there will no longer be viable populations of these species in the future, but she’s comforted seeing how engaged, passionate, and knowledgeable children are about biodiversity conservation. She encourages everyone to learn about the bushland in their local area and how they can protect it, join a local bushcare group, and encourage friends and family to get involved. 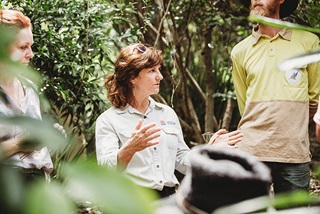 Di has worked in threatened species conservation for nearly 30 years. She started out as a bush regenerator and co-founded one of Australia’s largest rainforest nurseries.

Based in Coffs Harbour, Di’s job with Saving our Species sees her work across northern NSW on the conservation of many threatened rainforest plants.

‘Coastal fontainea plants change sex regularly. When we first started monitoring our planted specimens, we didn’t know what was going on. But through science and research we identified that the tree can change from female to male and vice versa. And the males tend to change sex more than the females,’ she explains.

Di says although she worries about habitat destruction and climate change, one of the biggest rewards of her job is working with passionate and dedicated landholders who are conserving species and habitats. She says we can all lend a hand by being active in local biodiversity projects and reducing our carbon footprint.

Threatened Species Officer Erika Roper has risen from small-town roots to become Twitter’s number one parrot aficionado, harnessing her love for science communications to gather a strong online following along the way.

Her first taste of ecology field work was while on exchange to Cornell University in New York, where she got to participate in trips to Peru and Kenya – life-changing experiences that fostered an already present passion for the natural world. With an Honours thesis on crimson rosella vocalisations under her belt, Erika put a hold on her PhD (the urban ecology of red-tailed black cockatoos), converted to being a botanist and joined the Saving our Species team.

Erika is a rare breed of scientist – the kind who has successfully bridged the gap between science and everyday people through engagement and communications. Her favourite channel is Twitter, where she’s built up quite a dedicated audience.

‘I started using Twitter during conferences, as it’s a great way to connect with people and follow along with talks, and I just kept using it. What I really love about Twitter is that you can actually have a conversation with people.’

In between posts of her cats (Baci and Mr Stripes), you’ll catch some of Erika’s random ecological facts, beautiful illustrations, or side-busting bird polls such as #Fluffenchops2020, which aims to decipher which bird has the best fluffenchops (fluffy cheek feathers – it was the Kākāpō). The next competition planned is #BorbOfTheYear, an arduous quest to find the world’s roundest bird. Science is a hard slog sometimes!

‘In my experience, people love to see science in action. What you are actually doing and what it looks like. Being a bit more informal in how you interact with people is also good. Show them that you have hobbies, you have pets, you have a sense of humour. A scientist is more than just an old white man in a lab coat.’

Erika sees value in harnessing people’s interest in science as a way to educate them about what really goes on behind the scenes.

Erika hopes to see more diversity in the science communication landscape, giving kids in future generations a range of role models to be inspired by.

You can read more about Erika’s work with the threatened and surprisingly beautiful little whip snake and join her during her surveys of Kosciuszko National Park. 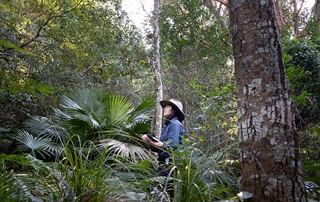 We have recently seen some of our Olympians etch their names into the sporting history books, but Senior Threatened Species Officer Jedda Lemmon has been working her way into the conservation history books by making new discoveries about the biology and distribution of some of our threatened plants.

Over the last few years, Jedda has been part of a team that has made some fascinating discoveries about the endangered Illawarra socketwood – discoveries that have captured the interest of many. Jedda sampled 24 populations of socketwood, for genomic analysis with The Royal Botanic Garden Sydney, to understand the extent of cloning and genetic diversity for this species. This tree reproduces asexually by ‘cloning’ itself through suckers that spring out from underground stems. Learn more about the cloning and expansion of this fascinating rainforest tree in the Illawarra socketwood video.

‘Our genetic work showed these clones can span staggering distances – even though they appear to be separate trees. One clone has been found to spread over 900 metres, nearly one kilometre!’

As part of this work, in collaboration with Wollongong Botanic Garden, Jedda found a new species of insect that contributes to low seed viability for the Illawarra socketwood – more investigation work is underway! This is just one of many contributions Jedda is making to the body of knowledge of threatened species conservation.

Jedda’s earliest work was in bush restoration before moving into vegetation survey, classification, and mapping where she spent a lot of time in the field learning from experienced botanists across the Illawarra, Central Coast, Hunter Valley, Blue Mountains and Western Plains. She firmly believes we can all play a part in the conservation of our native plants regardless if it is our career or not.

‘Our lives depend on plants. We can all contribute to their protection by improving the native vegetation on your property, by using local native plants in your gardens, or by getting involved in local community projects. It’s rewarding, and it helps keep our landscapes healthy and liveable – and you never know what you might find and discover.’

Find out more about the Saving our Species program and how we’re securing a future for our threatened species.

Patrols stepped up due to illegal beach parties