Nine years of work involving more than 100 contractors and staff has culminated in an award for Conservation Heritage for the Blue Mountains Grand Canyon Track at the National Trust Heritage Awards. 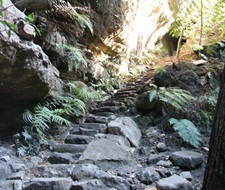 Office of Environment and Heritage (OEH) Chief Executive Anthony Lean, said OEH picked up two other awards for a Heritage Near Me virtual reality project and a new visitor display at Hill End.

“The Grand Canyon Track in the World Heritage Listed Blue Mountains received the award for Conservation Landscape Heritage, acknowledging excellence in a project that is now almost complete after nine years of dedicated effort.

“The Grand Canyon Track was officially opened in 1907 and now, more than one hundred years later, it seems fitting that its restoration project has received this honour.

“Building the track was an amazing feat in the early 1900s and while our staff have had the benefit of modern equipment, the restoration has also been no easy task, dealing with 1200 stone steps, very rugged terrain, multiple creek crossings and cliff climbs.

“Added to these challenges was the critical aim to protect the heritage fabric and traditional character of the original track work, while upgrading safety and construction to ensure visitors on the popular track are kept safe.

“OEH’s Heritage Near Me program was also recognised at the National Trust Heritage Awards, with a Highly Commended for its Our Heritage video project.

“Our Heritage is a virtual reality (VR) film, which explores the diverse heritage of NSW and its people.

“You can watch it here - Our Heritage virtual reality film (YouTube) - or catch the full VR experience at one of the Heritage Near Me Roadshow events which are occurring across the state.

“The new innovative visitor interpretation display at Hill End Heritage Centre “Alchemy: The lustre of Hill End” was also recognised in the Education and Interpretation category.

“It was very pleasing to see the work of OEH acknowledged as amongst the best in the state,” Mr Lean said.

West Fest celebrates the culture and heritage of Western Syd...