A stunning 33,000 hectare (ha) property featuring nationally significant wetlands and habitat for up to 40 threatened species will be added to the NSW national park estate. 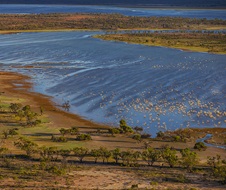 "We have smashed target after target of adding additional hectares and stronger protections to national parks, helping us to leave this planet to our kids better than we found it," Mr Kean said.

"With this acquisition, 597,000 hectares have now been reserved or acquired for reservation since March 2019 – an increase of 8.3% to our national parks estate," Mr Kean said.

"Wetlands are some of the most endangered ecosystems on the planet, which is why this acquisition is so important, it will forever protect vital wetlands in the Cuttaburra basin, part of the Paroo and the Warrego floodplains."

Lake Wombah can host over 20,000 waterbirds, including rare species such as the freckled duck, while the expansive Yanatabulla Swamp hosts thousands of internationally protected migratory shorebirds as well as up to 50,000 waterbirds including pink-eared ducks, grey teals, night herons and many other species.

It features a diversity of ecosystems – from gidgee country and stony mulga rises through to Mitchell Grass grasslands, Blackbox and Coolibah lined creek systems and complex lignum swamps.

The property is a vital refuge for a host of threatened species. The Kultarr, a small carnivorous marsupial with less than 100 records in New South Wales, has been confirmed on the property. Other threatened species include the grey-crowned babbler, the hooded robin and the brolga.

Located in in the traditional Paroo River country of the Budjiti and Barkandji People and 150 kilometres north of Bourke on the NSW-Queensland border, the property also contains extensive Aboriginal cultural heritage, with evidence of artefacts and other items of significance across the property.

The acquisition will help fill important gaps in the national park estate including landscapes that are not protected, or are inadequately protected, in the existing estate.

"We still have more work to do – around 20% of landscapes in New South Wales still have no protection in the national park estate," Mr Kean said.