The Lower Darling Baaka River and Great Darling Anabranch (Tallyawalka) are flowing simultaneously into the Murray River for the first time since 2016. 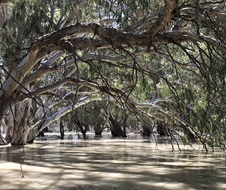 Higher than average spring/summer rainfall in the Northern Basin has provided the largest flow event into the Menindee Lakes since 2015.

The NSW Department of Planning and Environment - Environment, Energy and Science Division (DPE EES) environmental water managers are working closely with WaterNSW to supplement airspace releases with water for the environment to produce river flow conditions that promote fish breeding and spawning.

This practice is known as adaptive management.

Water NSW strategically release water from storages to provide ‘air space’ which allows room for future inflows caused by upstream rainfall. With La Nina producing higher than average rainfall across eastern Australia, flows through the river systems are expected to continue in 2022.

In the Lower Darling Baaka, environmental water was used in September to provide Murray Cod nesting habitat and promote breeding conditions. The Department's environmental water managers planned to follow this flow with another larger flow ‘pulse’ in October to encourage golden perch to spawn, however nature intervened, and the ‘pulse’ was created using airspace releases from Menindee Lakes through October. These releases were then extended using water for the environment during November with the aim of keeping Murray cod nesting sites inundated, allowing the breeding cycle to continue. Air space releases have since been implemented by river operators in December.

Managed environmental flows in the Great Darling Anabranch were used in combination with air space releases from Lake Cawndilla to provide a ‘large fresh’ event designed to connect golden perch with the Murray River. Environmental water managers used 30 gigalitres of water for the environment to extend air space releases through October and November. From late November-December air space releases have resumed and are expected to extend into January 2022. The Great Darling Anabranch connected with the Murray River on 12th December, taking 70 days to make the journey.

The Department, in conjunction with NSW Fisheries, are implementing a golden perch monitoring program to address knowledge gaps with a view to improve fish dispersal outcomes for future environmental water releases. Factors relevant to fish movement being studied include fish age, seasonality, flow volume, and water temperature. NSW Fisheries caught and tagged 100 golden perch in early December as part of this new monitoring. Further tagging and logging of golden perch is planned in the Great Darling Anabranch in early 2022.

The Department is working with agencies including DPI Fisheries, WaterNSW, the MDBA and the Commonwealth Environmental Water Holder to manage the Lower Darling Baaka and Great Darling Anabranch flows. Water for the environment from CEWH accounts has been used for these events.