The NSW Government has released its consultation package to overhaul ineffective, complicated environmental laws and create a new system that improves both environmental outcomes and farmers’ productivity. 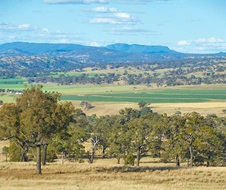 Under the new system, routine farm work would be exempt from regulation, farmers would be able to plan for the future to improve their productivity, and the government would provide farmers with incentives to conserve native plants and trees on their land.

The reforms would also protect and enhance the environment with an historic investment of $240 million over five years in private land conservation, $70 million in each following year and $100 million dedicated over five years to the “Saving Our Species” program.

Deputy Premier Troy Grant said the NSW Government was delivering on its commitment to repeal the Native Vegetation Act and create laws that both protect the environment and give farmers a fair go.

“For too long the burden of these laws has rested on the shoulders of farmers – and I am proud we are one step closer to repealing this legislation and delivering on the independent panel’s recommendations to reform land management in this state,” Mr Grant said.

Environment Minister Mark Speakman said the new laws would take a strategic approach to conservation and would complement the Commonwealth’s biodiversity protections.

“We are delivering a simple and effective way to use and protect land that is backed by record government investment to build a network of conserved lands on private property.

“We have tough measures to protect endangered ecological communities supported by Commonwealth protections that will conserve our biodiversity for future generations.”

Minister for Primary Industries Niall Blair said the reforms would give farmers an opportunity to make informed choices on what works best for their land.

“Our farmers are our frontline environmental custodians and it makes sense to give them the flexibility to manage and protect the land that is the lifeblood of our regional communities.”

The reform package will:

Drafts of the new Biodiversity Conservation Act and amended Local Land Services Act are on public exhibition and open for submissions for the next eight weeks.

Details at A new approach to land management and conservation in NSW website.