More than 100 endangered Sloane's froglets have been heard calling in their new accommodation in Albury, in an innovative project providing habitat for more than just humans in new housing estates. 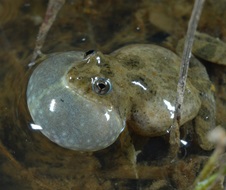 The partnership between the NSW Government's Saving our Species program and Albury City Council shines a spotlight on the importance of habitat.

"There are only a few remaining populations of Sloane's froglet in New South Wales and these are mainly in the urban and industrial areas of Albury and Corowa.

"The Thurgoona area of Albury is home to one of the largest populations of the species.

"With the expansion of housing at Thurgoona, Saving our Species was able to work with Albury City Council and local developers to establish Sloane's froglet breeding habitat in stormwater detention basins.

"The innovative constructed habitat, which operates as artificial wetlands, has been immensely successful.

"Across 5 constructed wetlands, surveys have found the frogs calling in numbers ranging from 1-5 calling males to up to 50 at each wetland, and we expect the numbers to increase in the near future.

"This project is about improving and maintaining connectivity and the extent of available habitat, which is one of the targeted, practical actions needed to save the froglet from extinction.

"Sometimes when conserving threatened species we have to think outside the box."

"The Sloane's froglet might be tiny but it's a huge example of the need to balance the environment versus growth as our city expands," he said.

"This work is not only providing hope for a special creature, it's also creating an urban environment with a closer connection to nature – which is great for animals and people."