One of Sydney's most loved natural destinations, the spectacular Royal National Park is set for a major revitalisation with plans announced on Friday. 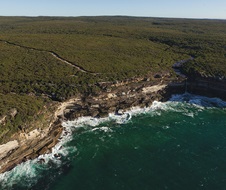 Greater Sydney Branch Director Deon van Rensburg said the draft Plan of Management (PoM) maps out how the Park will be protected and showcased as one of the nation's most important natural areas.

"With around 6 million visits per year Royal National Park is one of Australia's most popular parks. It is also on Australia's National Heritage List as a place of outstanding significance to the nation," Mr van Rensburg said.

"Royal National Park together with nearby Heathcote National Park and Garrawarra State Conservation Area, protect one of the most biodiverse areas in Australia, supporting more than 1000 plant and 350 animal species, including some of the most significant vegetation remaining in the Sydney Basin.

"The world's second oldest national park, Royal is a stunning place and one of our most visited parks where sites like Wattamolla and Audley attract thousands of visitors every weekend.

"The Plan will guide the future management and protection of the natural and cultural values, while providing opportunities for people of all ages, cultures and abilities to enjoy these much-loved places.

"This includes improvements and restoration at popular visitor precincts including upgrades to the historic 82-year-old Audley Boatshed, providing undercover space for picnics and a new open pavilion so that visitors can continue to enjoy the beautiful Port Hacking River.

"At Wattamolla, another popular visitor precinct, new amenities include better picnic areas, access improvements and a new walking track to the beach.

"To manage sustainable mountain biking in these areas a Royal Parks Mountain Biking Plan is also available for public comment.

"This is a great way for the millions of people who love and use these Parks to have a say in how these precious natural assets are managed into the future," Mr van Rensburg said.

The Plan now on exhibition has been prepared with extensive consultation from key stakeholders and your views are important.

You can have your say at Royal parks Draft Plan of Management: public consultation.