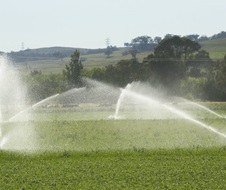 OEH and NSW Farmers will launch a detailed guidebook about solar pumping system selection and design, as well as a farmer’s guide to renewable energy in agriculture at the first of a series of seminars beginning in Griffith on 27 May.

Mr Speakman said he was pleased to see a constructive collaboration between NSW Farmers and OEH that will be good for both the environment and the State’s farmers.

“Sustainability in the agricultural sector is critical in the longer term. Anything that reduces energy costs for farmers while limiting environmental impact is a good thing.

“Fostering and furthering such collaboration between Government and the farming community is something I want to see more and more of in the future,” Mr Speakman said.

“Many farmers already use solar pumping for stock and domestic supply but are not aware of its application for larger pumping tasks. Solar pumping systems are now being used effectively for broad acre crops such as cotton and intensive horticulture applications such as orchards. The detailed guide and supporting information resources offer practical solutions so that farmers can effectively scale solar systems to suit large pumping tasks,” Mr Eyre said.

“Our regional economy has a very broad dryland and irrigated agricultural base, with livestock, viticulture, vegetables, nuts, rice and cotton. Installation of renewable energy has a role to play in improving future agricultural productivity.”

The first of five seminars will be held in Griffith on 27 May, followed by Deniliquin on 28 May, Hunter 1 June, Western Sydney 2 June and Warren 5 June.

During these seminars, industry experts will speak about pump efficiency, AC solar pumping, and diesel hybrid options, and identify opportunities to incorporate clean energy technologies on farm. People can also collect these guides, which will also be available on line at AgInnovators.