The NSW Government is providing an additional $1.47 million support for the State's dedicated army of volunteer wildlife rehabilitators to help them meet the growing demands of rescuing more than 100,000 animals every year. 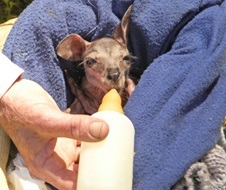 Environment Minister Matt Kean said the funding from the NSW Environmental Trust, will go to the Foundation for National Parks and Wildlife for their Wildlife Heroes Program, to increase volunteer support and engagement and improve training.

"The State's volunteer wildlife rehabilitators are the unsung heroes of our native animal rescue operations, dedicating their own time and significantly, their own money to look after our animals when they need it most," Mr Kean said.

"On average, each volunteer contributes almost 900 hours a year while veterinarians and veterinary nurses also contribute more than $1.8 million in free services and products a year.

"Without their commitment, dedication and responsiveness many of our sick and injured native animals would not survive.

"This increasing burden has prompted a rethink of how the sector is acknowledged and supported, and I'm pleased to announce funding to address this."

Ian Darbyshire, CEO of Foundation for National Parks and Wildlife which will oversee the funding said they were proud to support this important initiative for the volunteer sector in New South Wales.

"Over the next three years we will work with NSW National Parks and Wildlife Service to support the delivery of their strategy and provide much needed funding to the many volunteers working tirelessly each and every day to save our native wildlife," Mr Darbyshire said.

Last week, the NSW Government also announced additional emergency funding up to $1 million for wildlife rehabilitators to help support the rescue and rehabilitation of injured wildlife affected by the NSW bushfires.

The first round of NSW emergency funding will be available from 1 December 2019. Licensed Wildlife Rehabilitators should email wildlifeheroes@fnpw.org.au as soon as possible for further information on how to register your group.

This funding is in addition to the $4.05 million for wildlife rehabilitation announced in the NSW Government's Koala Strategy which will fund rescue and rehabilitation equipment and also includes improved training opportunities for veterinarians in wildlife care. Altogether, almost $7 million is being provided to support this sector and implement the strategy.

A new strategy to support these measures will soon be released.