The future of Wollumbin National Park on the NSW North Coast will be guided by Aboriginal custodians after the development of a Memorandum of Understanding (MOU) with the Wollumbin Consultative Group, which represents a range of Aboriginal groups and families with a connection to the site. 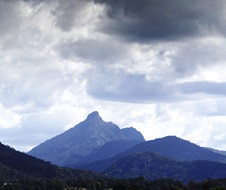 "Wollumbin holds deep significance for the Bundjalung people and this step recognises the importance of protecting its cultural value," Mr Griffin said.

"The Wollumbin Consultative Group has been providing guidance to NPWS on the management of the national park since 2000, and its long-standing view is that public access to the summit is not in line with the cultural values of the area.

"We're committed to putting Aboriginal land management and stewardship at the heart of our efforts to conserve our precious environment and care for Country, which is why any future decisions about Wollumbin will be guided by Aboriginal custodians.

"While the summit track at Wollumbin remains closed, there are alternative trails for visitors and hikers to choose from in the region, with new visitor infrastructure being developed as part of the largest investment in the history of national parks.

"The $7.35 million Tweed Byron Hinterland Trail, for example, will be a stunning new 38 kilometre, 4-day hiking trail, and cement the North Coast of New South Wales as a premier destination to visit."

In addition, plans for 2 new walk experiences are being finalised:

National parks are a key driver of the visitor economy on the NSW North Coast, generating $974 million per year and supporting more than 600 jobs.

Wollumbin Mountain was declared an Aboriginal Place above 600 metres to the summit by the NSW Government in 2014 to protect its cultural values and formally recognise it as a place of special significance to Aboriginal people.

The development of an MOU will provide a framework for Aboriginal decision making about the national park, including any future decisions regarding the summit track and the installation of new visitor infrastructure.

Minister for Aboriginal Affairs and Tourism Ben Franklin said the decision reflects the importance of the site to Aboriginal people of the far North Coast.

"Wollumbin Aboriginal Place is a sacred place of great spiritual significance to the Bundjalung and Githabul countries with cultural connections to many Aboriginal communities around the nation," Mr Franklin said.

"The Wollumbin Consultative Group is clear in its wishes for this site, and I welcome the partnership with NPWS for the future management of this significant cultural site."

"Wollumbin is of the highest significance to the Aboriginal nations, particularly the Bundjalung nation in northern NSW, as a sacred ceremonial and cultural complex that is linked to traditional law and custom. Wollumbin is interconnected to a broader cultural and spiritual landscape that includes Creation, Dreaming stories and men's initiation rites, of deep antiquity.

Bundjalung beliefs illustrate the spiritual values embodied and evoked in Wollumbin and its connections to a broader cultural landscape. These connections are important to the spiritual identity of the Bundjalung nation, many other nations and families connected to Wollumbin, predominantly men and also women.

We have a responsibility for caring for Country, our environment, plants, animals, water, earth, and sky. As the oldest living culture in the world, we are sharing our cultural knowledge and entrusting this knowledge with the broader community so that our values, tradition, and law are respected, understood and acknowledged."

Wollumbin National Park has been closed since March 2020 due to COVID-19, public safety risks and further consultation with the Aboriginal community.

Roll out the green carpet - nominations open for Green Globe...

$16 million in funding for NSW manufacturers to save energy